St. Xavier's campus in 2000, as seen from the sky, before the South Campus and the new theater were built.

Saint Xavier High School (pronounced /ˈzeɪvjər/ ZAYV-yer), or simply St. X, is a private, all-boys high school near Cincinnati, Ohio, United States. Because St. Xavier opened in 1831, it is the oldest high school in the Cincinnati area and one of the oldest in the nation, even older than many universities. The school is one of four all-boys Catholic high schools in the Archdiocese of Cincinnati, but it is run by the Society of Jesus (Jesuits). St. Xavier has more than 1,500 students, making it the largest private high school in Ohio and one of the 100 largest high schools in that state. St. Xavier's campus covers 110 acres (0.4 km2), about as much as the Vatican City. 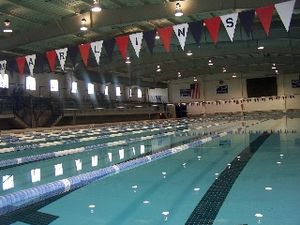 St. Xavier gave an honorary degree to Nick Clooney, a television news reporter, game show host, and politician who would have graduated in 1952.

All content from Kiddle encyclopedia articles (including the article images and facts) can be freely used under Attribution-ShareAlike license, unless stated otherwise. Cite this article:
St. Xavier High School (Cincinnati) Facts for Kids. Kiddle Encyclopedia.