The Grade I listed, mainly Norman Church of Saint John the Baptist in Adel, Leeds, West Yorkshire, England has been described by Nicholas Pevsner as 'one of the best and most complete Norman churches in Yorkshire'. It is most notable for its magnificent south doorway with surrounding carvings, and highly carved Norman chancel arch. There is also a replica of a 13th-century sanctuary ring on the exterior of the south door, the original having unfortunately been stolen in 2002. The church is an active Anglican parish church in the archdeaconry of Leeds and the Diocese of Leeds.

The church is of Norman origin having been built between 1150 and 1170. Alterations were made in the 14th and 16th centuries. The west gable and bellcote were built between 1838 and 1839 by R. D. Chantrell, who also restored the roof in 1843. In 1879 the church underwent further restoration. The paternal grandparents of the Duchess of Cambridge married at Adel Church in December 1946.

The church was Grade I listed on 26 September 1963; the sundial, a mounting block and several memorials are Grade II listed. 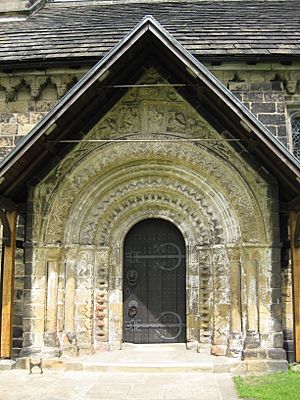 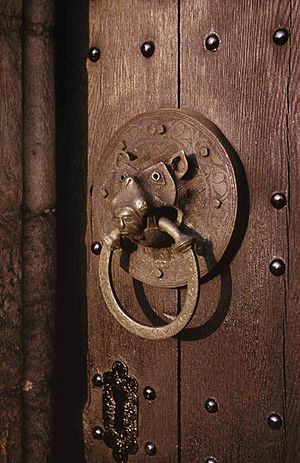 The original Norman door ring in 1963. 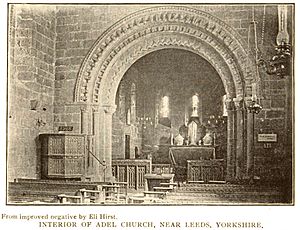 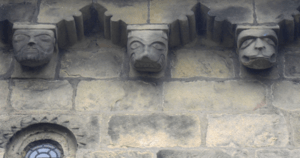 The corbel frieze and round Romanesque window

The small two-cell church has a nave and chancel with a lower roof. Its most notable external feature is a magnificent Norman doorway on the south side with four or more levels of elaborately carved arches. In the gable are weathered relief of Christ in majesty and several symbols including the lamb and flag, the cross and the sun and moon. The boarded door had iron studs and a 13th-century bronze sanctuary ring (door knocker) depicting a monster swallowing a man that was replaced by a replica after the original was stolen in 2002. The church has small Norman round windows and a flat-headed 14th-century decorated window in the chancel. The south wall of the chancel has a small priests' doorway. The vestry is connected by a short passage to the north-west side of the church with an arched doorway and trefoil window, while the vestry has a three-light east window. The north and south walls are decorated with 81 corbels and the chancel arch has 37 grotesque beakheads. The bellcote dates from 1839.

The chancel arch dates from 1160-70, its carved capitals show the baptism of Christ, the crucifixion, a centaur with bow and a horseman with lance. The octagonal font at the west end is possibly the original having been found in the churchyard in 1859. A carved oak canopy by Eric Gill from 1921 depicts the crucifixion, six of the sacraments and a Christian arriving in heaven. The oak pulpit with panels carved in linenfold style was presented by EW Beckett of Kirkstall Grange in memory of his wife who died in 1891. The stained glass is by Henry Gyles of York.

The church hall is in the old stables. St John the Baptist Church of England Primary School is on Long Causeway.

All content from Kiddle encyclopedia articles (including the article images and facts) can be freely used under Attribution-ShareAlike license, unless stated otherwise. Cite this article:
St John the Baptist Church, Adel Facts for Kids. Kiddle Encyclopedia.