St John's Church is a 13th-century church on the corner of Grainger Street and Westgate Road in Newcastle upon Tyne, England, dedicated to St John the Baptist.

The old church of St. John is believed to date from c.1287. It has a low square time-worn tower, standing amongst green trees in the graveyard. Gray calls it "a pretty little church, commended by an arch-prelate of this kingdom because it resembled much a cross". The church's quiet simplicity contrasts with the modern buildings which surround and overtop it on three sides. Its tower is low and square, with little pinnacles at the corners; its windows have flattened arched tops, far from elegant in design but there is something about it which makes it pleasing. Perhaps it recalls to mind some little country church, and that its aspect is suggestive of green trees and sunny pastures, amongst all the turmoil and bustle of the busy streets which run past it.

Over the outside of the large window in the south transept, which looks into Westgate Street, is a stone which has carved upon it the arms of Robert Rhodes, the builder of St. Nicholas’ steeple, and the benefactor of this and all the churches of the town. The stone we see is a copy of the original one placed there in the lifetime of the good lawyer, as were also his arms in the groining of the tower, to commemorate his generosity. The old one was taken down about 1861, when some repairs were being executed, and is now in the castle.

The 15th-century font cover and the Jacobean pulpit are fine examples of local woodwork. When the church was restored a new sanctuary was created at the Crossing, which contains a stone altar slab given in 1712 as a reminder of the church revival under Queen Anne. The chancel, now the Lady Chapel, contains a window including the fragments of medieval glass with the earliest known representation of the arms of Newcastle. Further along the wall can be seen a cruciform opening which enabled the anchorite, whose cell was above the present sacristy, to see the altar. The rood and reredos are both the work of Sir Charles Nicholson. 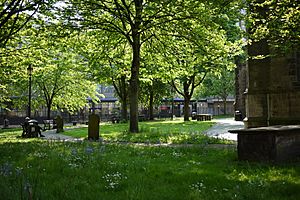 What remains of the graveyard

Part of the graveyard was built over in the 1960s for a hall and meeting rooms; most of the rest has been paved over. There remain (2010) about ten gravestones.

The Irish actor and poet John Cunningham is buried in the graveyard. In the quiet churchyard, not far from the east window lies, on the ground, a stone slab, part of a table monument, its four supporting pillars lying half buried in the soil beneath it. This is one of the most interesting monuments in the city. The inscription upon it, though partly obliterated, can be read as follows:

All content from Kiddle encyclopedia articles (including the article images and facts) can be freely used under Attribution-ShareAlike license, unless stated otherwise. Cite this article:
St John the Baptist Church, Newcastle upon Tyne Facts for Kids. Kiddle Encyclopedia.