St Mary's Church in Handsworth, South Yorkshire, is a Church of England parish church about 3 1⁄2 miles (5.6 km) east of the centre of Sheffield, England.

St Mary's was originally a Norman church built in about 1170. It was founded by the Norman lord, William de Lovetot, or his father Richard, and the foundations were planned by William Paynel.

In the 1220s St Katherine's Chapel was added, probably for Maud de Lovetot, for prayer and Mass to be offered for the soul of her husband Gerard de Furnival, and perhaps their son, Thomas de Furnival who died on a crusade to Jerusalem and the Holy Land.

By 1472 the Fabric Rolls of York reported that the church was ruinous, but in the process of being rebuilt. It was successive Earls of Shrewsbury who had much of the damage repaired in the Tudor era. 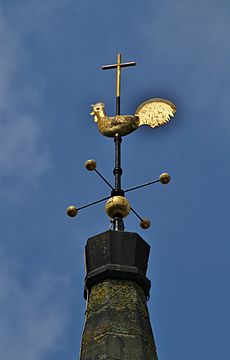 Weathercock on top of the spire

Lightning struck the church spire in 1698. The new steeple subsequently built to replace it was much smaller and became known as "the Handsworth stump". In the 1820s the "stump" was demolished and a new tower erected. Lightning struck the tower again in January 1978, this time causing less damage. The spire, and the clock and bell tower were extensively repaired in 2002.

Simon Foliot, the first Rector, had two assistants and by 1535 there were five. The assistants lost their livings in the English Reformation.

The west tower has a ring of eight bells. John Taylor & Co of Loughborough, Leicestershire re-cast and re-hung all eight bells in 1920. There is also a service bell, which was cast in 1590 by Henry II Oldfield of Nottingham.

The church is a Grade II listed building.

The Tudor rectory was where the Parish Centre is now. It was originally a timber-framed building. In the late 17th or early 18th century, a larger and more modern rectory was built near the chancel of the church. Shortly afterward a wing complementary to the east wing was built.

Little of the Tudor rectory survives, but parts were incorporated into the new building. A section of the straw and daub wall survives in the current museum, as does an oak tree post in the current reception hall.

Immediately north of St Mary's church is the Cross Keys Inn. This was built in the mid-13th century as a church house for the chaplains and lay clerks attached to St Mary's. After the Reformation, the house was turned into a school. In about 1823 it became licensed as a public house. It has remained one ever since, now called the Cross Keys. 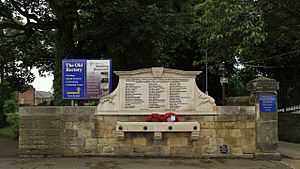 Parish registers of baptisms, marriages and funerals at St Mary's survive from 1558 onwards. The registers are continuous until 1836, when a new system of registration was introduced.

All content from Kiddle encyclopedia articles (including the article images and facts) can be freely used under Attribution-ShareAlike license, unless stated otherwise. Cite this article:
St Mary's Church, Handsworth, Sheffield Facts for Kids. Kiddle Encyclopedia.