St Mary's Church, Higham Ferrers is a Church of England parish church in Higham Ferrers, Northamptonshire. It is a Grade I listed building. 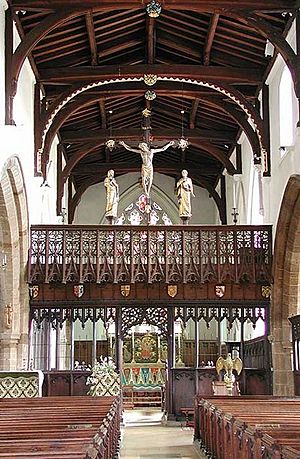 The nave, screen and high altar 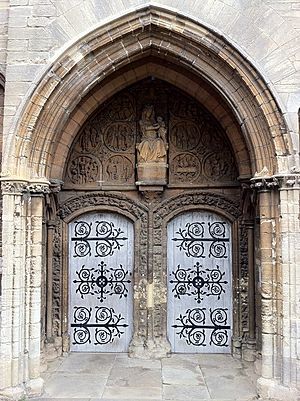 The present church was founded by a charter of King Henry III in about 1220, with the tower being the last part of the first phase to be completed in about 1250. A large proportion of the original church survives to the present.

The next phase of building, in about 1320, was the widening of the north aisle and the replacement of the nave arcade, to allow for the insertion of the Lady Chapel. Additional windows were added to the chancel and the south aisle.

The clerestory and the low pitched roof, with parapets is from the early 15th century, possibly under the auspices of Bishop Henry Chichele, later Archbishop of Canterbury. Chichele also had the rood screen and choir stalls with their misericords installed in about 1425. It is worth noting that Archbishop Chichele also had All Souls College, Oxford built, and there is a definite family resemblance between both sets of misericords, it is possible that the same carver, possibly Richard Tyllock, created both.

In 1631 the spire and part of the tower collapsed, and was then repaired shortly afterwards. This was the last work performed on the fabric of the church. Simon Jenkins, in his England's Thousand Best Churches, describes the spire as "one of the finest in a county famous for spires" Two restorations took place during the 19th century, but both seem to have been sympathetically performed.

The tower contains a ring of ten bells, the previous eight having been restored and rehung in a new frame, together with two new bells, in 2014 by John Taylor & Co, Loughborough, the project marking the 600th anniversary of Henry Chichele's consecration as Archbishop of Canterbury. 167 full peals were rung on the eight bells and twenty seven have now been rung on the ten, one being in a new "method", Regnum Diutissime ("the longest reign") Delight Royal in honour of the Queen having become the longest-reigning British monarch.

One of the chief glories of the church is the west porch. Built between 1270 and 1280, it is almost certainly the work of one of the foreign masons employed in the rebuilding of Westminster Abbey, the style and quality of the work here closely resembling the porch of the North transept of the Abbey. Simon Jenkins, awarding St Mary's three stars, says:

The west front of the tower is little short of sensational, a gallery of medieval decoration attributed to French masons from Westminster. The twin doors are framed with carvings and a Tree of Jesse rising from a central shaft. The unusual roundels in the tympanum, based on illuminated manuscripts, are of New Testament scenes. Sculpture dots each front, including on the north a charming man making music while locked in the stocks. Some of the niches have excellent modern statues in them.

One of the earliest examples in England, the elaborate memorial brass to Laurence St. Maur, (died 1337) is considered by Pevsner to be one of the finest brass monuments in England. Originally on the chancel floor, it was placed on an altar tomb, between the two chancels, in 1633. St. Maur wears a heavily embroidered liturgical vestment and around his neck is a rectangle of cloth embroidered with cinquefoils.

Above the main figure in the canopy is a group of figures. Abraham is seated in the middle and holds a globe in his left hand, with his right hand raised in benediction. St. Andrew and St. Peter are to the left of him and the St. Paul and St. Thomas are to the right. Angels, on either side of Abraham, hold St. Maur's soul. In his 1912 book Brasses, John Sebastian Marlowe Ward says: "Canopies over Mass priests are very rare and this is by far the finest."

Adjacent to the church, at the west, is the Chantry Chapel, also a Grade I listed building. Built in the early 15th century for Archbishop Chichele, it was restored in the 20th century by Temple Moore. It is of limestone ashlar with lead roof. It was used as a Grammar School from 1542 to 1906 and was re-dedicated as a chantry chapel in 1942.

To the south of the church, across the churchyard, is the bede house, also a Grade I listed building. Built in about 1428 it was restored in the 19th century. It is of squared coursed and banded limestone and ironstone, with a plain tile 20th-century roof. It is now used as the church hall.

The chantry chapel and Bede House, both Perpendicular Gothic in style, are open to the public.

The stone cross in the churchyard, another Grade I listed building, was known in 1463 as the Wardeyn or Warden Cross. It lies 48 metres (52 yd) west of the church tower and is believed to be medieval in origin, with later additions. It was restored in 1919 as a war memorial.

All content from Kiddle encyclopedia articles (including the article images and facts) can be freely used under Attribution-ShareAlike license, unless stated otherwise. Cite this article:
St Mary's Church, Higham Ferrers Facts for Kids. Kiddle Encyclopedia.