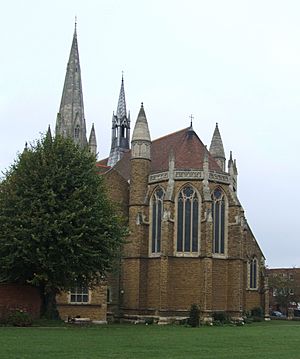 St Matthew's Church, Northampton is a Church of England parish church in Northampton, within the Diocese of Peterborough.

The church is a Grade II* listed building. It was erected (1891–4) in memory of brewer and MP, Pickering Phipps, beside the Kettering Road. The architect was Matthew Holding.

Canon John Rowden Hussey was vicar from its consecration in 1893 to 1937. Walter Hussey, vicar from 1937 to 1955 succeeding his father, was a patron of the arts. He celebrated the church's 50th anniversary with a sequence of events and commissions: the commission of the anthem Rejoice in the Lamb from Benjamin Britten; a performance from the BBC Symphony Orchestra (2 October 1943); an organ recital by George Thalben-Ball, and the commission of Henry Moore's sculpture "Madonna and Child".

Buoyed by the success of the 1943-4 commissions, Hussey continued to commission new works of art. Other musical commissions included The Revival by Edmund Rubbra (1944); Festival Anthem by Lennox Berkeley (1945), Lo, the full, final sacrifice from Gerald Finzi (1946), and works by Christopher Headington, Malcolm Arnold and others. There were commissions of poetry: a Litany and Anthem for St Matthew's Day from W. H. Auden and The Outer Planet from Norman Nicholson. The recitals continued throughout this time, most notably with two concerts by the singer Kirsten Flagstad

In the north transept is Henry Moore's stone sculpture, "Madonna and Child" (1944) and in the south transept a painting of the Crucifixion (1946) by Graham Sutherland. The triptych in the Lady Chapel is by C. E. Buckeridge. A 2009 addition is a bronze statue of St Matthew by Ian Rank-Broadley.

A 1956 oil and watercolour painting of St Matthew's Church by John Piper is in the collection of the Northampton Museum and Art Gallery. 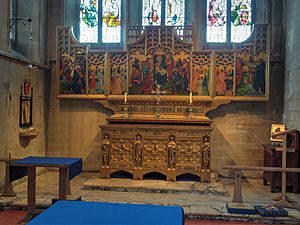 The triptych in the Lady Chapel by C. E. Buckeridge

St Matthew's follows an Anglican service with Catholic traits. The church celebrates two Eucharistic services on a Sunday including a Parish Mass at 10.15am which is Choral on Feast Days. The Parish Mass is pro populo on the nave altar and the lectern has recently been moved from the chancel step to the high altar to make way for a traditional statue of St Matthew. Choral Evensong is sung twice a month with Benediction following the service on the third Sunday of each. The church maintains a daily Eucharist service and has done since its founding in 1893. The Daily Offices of Morning and Evening Prayer are also said publicly every day of the year.

Music has long been an important part of the life of St Matthew's, both liturgically and through links forged with local educational, amateur and professional ensembles.

For many years St Matthew's had an all-male choir which was disbanded in the early 2000s. The choir now consists of girl and boy choristers aged 8–18 and adult Altos, Tenors and Basses who sing two services each Sunday. The church choir is supported by The St Matthew's Singers, a choir of local amateur singers, who sing Choral Mass on mid-week Feast Days. The whole music department is overseen by a Director of Music, Parish Organist and Organ Scholar.

Many of the previous St Matthew's Directors of Music have gone on to hold important positions in Church Music. These have included Kings College, Cambridge, Wells Cathedral, Norwich Cathedral, Blackburn Cathedral, Llandaff Cathedral, York Minster, and the Cathedral of Saint John the Divine, New York City. Andrew Reid, a St Matthew's Organ Scholar, is now Director of the Royal School of Church Music.

A list of musical commissions of St Matthew's Church is here below:

All content from Kiddle encyclopedia articles (including the article images and facts) can be freely used under Attribution-ShareAlike license, unless stated otherwise. Cite this article:
St Matthew's Church, Northampton Facts for Kids. Kiddle Encyclopedia.