Star Peak is a 8,690-foot (2,650-metre) mountain summit located in the Methow Mountains, a sub-range of the North Cascades in Washington state. The peak is the highest point on Sawtooth Ridge. It is protected by the Lake Chelan-Sawtooth Wilderness within the Okanogan National Forest. The nearest higher peak is Oval Peak, 2.52 miles (4.06 km) to the north. Precipitation runoff on the south side of the mountain drains into Lake Chelan via Prince Creek, whereas the north side of the mountain drains into Buttermilk Creek which is a tributary of the Twisp River.

Lying east of the Cascade crest, the area around Star Peak is a bit drier than areas to the west. Summers can bring warm temperatures and occasional thunderstorms. With its impressive height, Star Peak can have snow on it in late-spring and early-fall, and can be very cold in the winter. 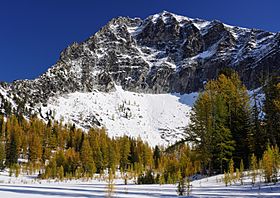 All content from Kiddle encyclopedia articles (including the article images and facts) can be freely used under Attribution-ShareAlike license, unless stated otherwise. Cite this article:
Star Peak (Washington) Facts for Kids. Kiddle Encyclopedia.