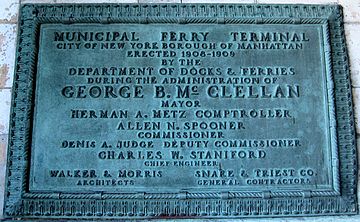 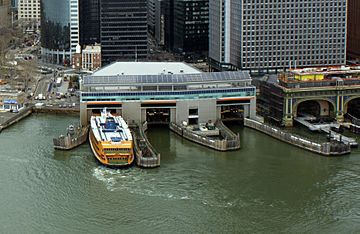 The Whitehall Terminal originally opened in 1903 as a new transportation hub for the Staten Island Ferry, which was in the process of being acquired by the city government. It was renovated from 1953 to 1956 at the cost of $3 million, but by the 1980s, was in a state of deterioration. The Whitehall Terminal burned down in a fire in 1991, and was completely rebuilt and rededicated in February 2005 as a major integrated transportation hub.

Originally, before the terminal was first built, ferry service was provided as early as the 1700s by individuals (and later private companies) with their own boats. A major ferry accident on June 14, 1901, which sunk one ferry and killed four passengers was used by the city as a justification for their acquisition of the Staten Island Ferry. The City subsequently banned other operators from using the Terminal, so ferries from Communipaw Terminal in Jersey City were re-routed to Liberty Street Ferry Terminal in lower Manhattan.

The original Whitehall Terminal, called the "Whitehall Street Ferry Terminal," served Brooklyn, Governors Island, Staten Island, and Jersey City, for passengers who traveled mainly by a system of elevated trains (nicknamed "els"). The ferry began operating under the municipal authority of the Department of Docks and Ferries on October 25, 1905, seven years after the five boroughs were consolidated into New York City. The "Municipal Ferry Terminal" was erected in 1906–9, during the administration of Mayor George McClellan, and designed by the architectural firm of Walker and Morris. Two primary ferry terminal buildings were designed in a Beaux-Arts style. One set was opened in 1906 for the two slips of the Staten Island Ferry with direct links to the Manhattan Elevated terminal platforms. The adjoining terminal was completed by 1909 in an identical style for the South Brooklyn Ferry routes and would become the Battery Maritime Building. However, a fire on the South Ferry elevated station in 1919 damaged the building.

As subways replaced the els, and cars began to travel through an increasing number of bridges and tunnels such as the Brooklyn-Battery Tunnel, a new expanded Whitehall Street terminal facility was designed by the firm of Roberts & Schaefer for what were now three Staten Island Ferry slips. The $3 million renovation to the terminal was announced in 1953, and it opened on July 24, 1956, using some of the steel framework of the original 1906 building. The 1956 Whitehall Terminal was purely functional, described as a "squat, washed-out green hulk in which function vanquished form," and was once referred to by the American Institute of Architects as "the world's most banal portal of joy."

The Whitehall Terminal's ceiling and roof were gutted by a major fire on September 8, 1991, rendering it unusable. The city saw the opportunity to rebuild the terminal. In 1992, the New York City Economic Development Corporation held an international competition for a replacement facility, and selected a design for the terminal from Robert Venturi in the following year. Other entrants included Rafael Vinoly, Aldo Rossi, Polshek Partners and SOM. The winning design featured a barrel vaulted waiting room whose ceiling was higher than Grand Central Terminal's. This design also incorporated a large electronic facade facing the harbor, which would have been the largest clock in the world; however, it was deemed by civic authorities as architecturally unacceptable. The clock was removed in a redesign by Venturi and the redesign also included windows facing Lower Manhattan and a large indoor LED display. Eventually, Venturi left the project due to budget cuts and Frederic Schwartz became the new architect.

A design for the new terminal was chosen in 1997. The design ultimately accepted, produced by former Whitehall Architectural Design director Ronald Evitts and Fred Schwartz, called for a 19,000-square-foot (1,800 m2) structure to replace the destroyed building, with a 90-foot-high (27 m) entry hall, and a waiting room that was 50% larger, with views of the New York Harbor. Schwartz's design included the same 75-foot (23 m) high glass wall on the Lower Manhattan side as the design of Venturi did. The size of the LED display in Venturi's design was heavily reduced. Also added were a rooftop waterfront viewing deck with a photovoltaic array on its canopy, a long sinuous canopy on the street side with the words "Staten Island Ferry" on it, and a Percent for Art installation called Slips by Dennis Adams. Two factors complicated construction of the new terminal. First, the NYCDOT mandated that two of the terminal's three ferry slips remain open during construction. Second, the terminal was being built over the Battery Park Underpass and three New York City Subway tunnels, so a foundation for the terminal had to be built 60 feet (18 m) underground. The reopening of the Whitehall Terminal took place on February 2005. 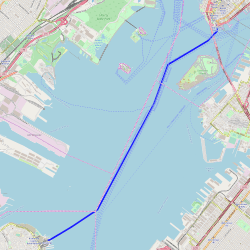 Route of ferry from Whitehall Terminal to Staten Island

The renovated Whitehall Terminal was designed by New York architect Frederic Schwartz, with Robert Silman Associates as the structural engineers. It includes a new 2-acre (8,100 m2) plaza, named after Peter Minuit. The terminal, which is open 24 hours a day, handles around 70,000 ferry passengers daily. It includes access to taxis, the New York City Subway (at the South Ferry–Whitehall Street station complex on the 1​, N, ​R, and ​W train), and buses; through the Terminal and Minuit Plaza, access to bicycle lanes and other water transport are also available.

Described as "an elegant addition to [the] city's architecture," a Newsday writer called it a transit hub that is so beautiful that it has become a destination in its own right: with "the panorama of lower Manhattan from the top of the escalators, the vast windows framing the Statue of Liberty, the upstairs deck with views of the harbor -- these are reasons to take shelter here for a little longer than the ferry schedule makes strictly necessary."

In addition to the many retail shops that can now be found at the terminal, GrowNYC, a New York non-profit organization, operates its only indoor farmers' market ("Greenmarket") within the terminal. 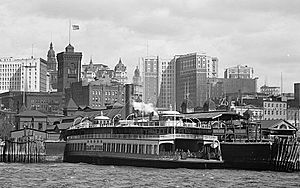 The terminal from the East River circa 1905 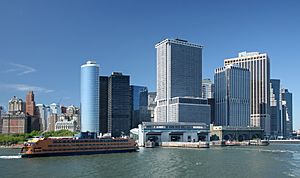 A century later, the terminal as seen from New York Harbor in 2008

As part of the "Percent for Art" initiative, the city's Department of Cultural Affairs purchased and installed sculptured granite benches created by artist Ming Fay, entitled Whitehall Crossing, in the waiting room. They were crafted to symbolize Indian canoes crossing New York Bay, and include a series of twenty-eight granite benches divided into three serpentine rows, suggesting the carved seats of a "floating, organic form over a water theme terrazzo floor." "As a functional art piece, Whitehall Crossing is almost invisible because it invites viewers to engage in, and thereby become part of, the design while sitting in the benches."

Ming Fay, a Shanghaiese Chinese artist, notes that this art he created was "inspired by the Native American's early crossings with dug out canoes." He described his goals for the art as follows:

In the Staten Island Ferry Terminal, I couldn't see putting an object in the space. I felt a functional statement would be appropriate. It is the imaginary journey before the real journey happens. In the lobby of this modern waiting room there are moments where the space is almost empty with people and then full again. The benches provide those moments of waiting with " invisible artwork" that is part of the space and act of public seating. I feel the experience of the space is about the thought of crossing over to the other side that goes back to the day when people had arrived at this point.

In parallel with the construction of the new terminal, Peter Minuit Plaza was completely reconfigured to provide easy accommodation for pedestrians, buses, and taxis. The redesign plan included 42 new trees, along with public space for community activities, covered walkways from the terminal to Whitehall Terminal, a dedicated cab drop-off area and a new bus loop.

In addition to the part the plaza plays in terms of transportation, it includes the "New Amsterdam Plein and Pavilion" (a gift from the Kingdom of the Netherlands), an area to showcase art, design, and horticulture. This area was conceived as an "outdoor living room" where both scheduled and spontaneous activities can take place alongside public markets and a state of the art food and information pavilion. The Plein and Pavilion were designed by Dutch architect Ben van Berkel, and the $3.2 million grant from the Netherlands that funded part of the project was given in honor of the celebration of New York's 400th anniversary, as well as in honor of "the enduring relationship between New York and Holland." The rest of the plaza was funded by the Metropolitan Transportation Authority which paid $22.1 million, and the United States Department of Homeland Security which paid $1.4 million. The plaza reopened in 2011.

All content from Kiddle encyclopedia articles (including the article images and facts) can be freely used under Attribution-ShareAlike license, unless stated otherwise. Cite this article:
Staten Island Ferry Whitehall Terminal Facts for Kids. Kiddle Encyclopedia.