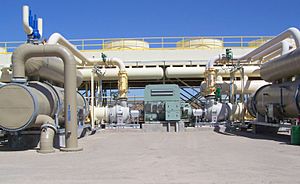 Steamboat Springs is a small volcanic field of rhyolitic lava domes and flows in western Nevada, located south of Reno. There is extensive geothermal activity in the area, including numerous hot springs, steam vents, and fumaroles. The residential portions of this area, located mostly east of Steamboat Creek and south of modern-day SR 341, are now known simply as Steamboat.

The state of Nevada has a Steamboat Springs Historical Marker (#198) situated along the eastern shoulder of the busy Carson–Reno Highway (US 395 Alt.), approximately 1.65 miles (2.66 km) south of the Mount Rose Junction (the intersection with SR 341 and SR 431). There were once several mineral spas operating here along Steamboat Creek, with at least one still in business.

Discovered in 1860 by a Frenchman, Felix Monet. In the early days, when the air was cool and calm, William Wright reported that as many as sixty or seventy columns of steam could be seen.

Steamboat Springs was once also a depot on the Virginia & Truckee Railroad's Reno-Carson City line. In 1871, with tracks yet to be built south through the Washoe Valley to Carson City, this temporary rail terminus became an important transfer point for passengers and freight heading up the Geiger Grade on stagecoaches bound for Virginia City and the mines of the Comstock Lode. Once tracks were extended south the following summer to meet the existing Carson-Virginia City rail line, such transfer business fell off rapidly.

Mark Twain wrote in August 1863 "..From one spring the boiling water is ejected a foot or more by the infernal force at work below, and in the vicinity of all of them one can hear a constant rumbling and surging, somewhat resembling the noises peculiar to a steamboat in motion - hence the name"

All content from Kiddle encyclopedia articles (including the article images and facts) can be freely used under Attribution-ShareAlike license, unless stated otherwise. Cite this article:
Steamboat Springs (Nevada) Facts for Kids. Kiddle Encyclopedia.