Stitch's Great Escape! was a "theater-in-the-round" attraction based on Disney's Lilo & Stitch franchise. A non-canon prequel to the original 2002 film that detailed Stitch's "first" prison escape, it was located in the Tomorrowland area of Magic Kingdom at the Walt Disney World Resort, as the fourth attraction to occupy the building and theater space that was previously used for Flight to the Moon, Mission to Mars and the ExtraTERRORestrial Alien Encounter. Designed by Walt Disney Imagineering, many of the animators who worked on Lilo & Stitch were directly involved with the attraction's development. The attraction was the only major permanent attraction based on Lilo & Stitch to have operated in the United States; all other such major attractions since have been exclusive to non-American Disney Parks resorts. 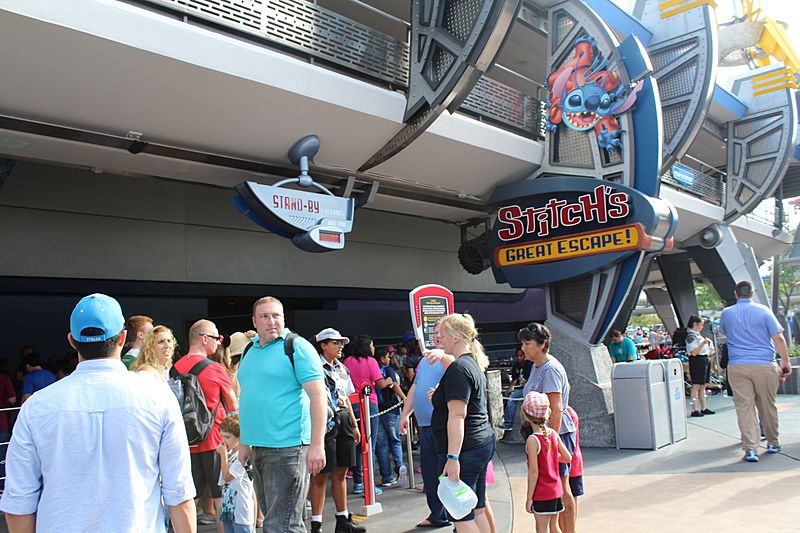 The attraction's main sign (facing westward) in September 2016, shortly before its seasonal operation.

Stitch's Great Escape! opened on November 16, 2004. During the opening event, a large inflatable Stitch was outside the park's entrance, but as guests reached Main Street, U.S.A., they spotted some signs noticing that Stitch was causing chaos at the park. Guests could even find security guards who were looking for Stitch. In addition, the Cinderella Castle was decorated with toilet paper and a graffiti message that said, "Stitch is King". Cobra Bubbles told guests that Stitch was on the loose. The opening celebration soon began, but Stitch had already taken over the party with Elvis Presley singers. As he was being escorted off the stage, a large group of elementary school students arrived at the scene. They were dressed in Stitch hats and light blue t-shirts. Several guests were also given interviews with Stitch and Cobra Bubbles. Near the World of Disney store over at Disney Springs, then called Downtown Disney, there was a van that was hijacked by Stitch surrounded by police line ribbons and barriers. Inside the van, there were road signs, a travel guide map, shoes and boxes with toy dinosaurs.

The attraction was met with mixed reception from guests, as some considered Stitch's Great Escape! a kid-friendly attraction, but others described it as the worst attraction at Magic Kingdom. The most notable common complaint was the chili dog burp that made a lot of guests nauseous.

At one time, Stitch's Great Escape! featured a FASTPASS entrance. When the system was modified to include wristbands instead of tickets, this entrance was removed as the popularity significantly declined.

The attraction last operated on January 6, 2018, which led to speculation about the continued existence of the attraction. The closure of Stitch's Great Escape! was said to be temporary, but in October, the Stitch animatronic and pre-show were completely dismantled. In 2019, the exterior was given a fresh coat of paint. On July 16, 2020, Disney confirmed that the attraction was permanently closed, with the attraction's signage later taken down on August 10, 2020. 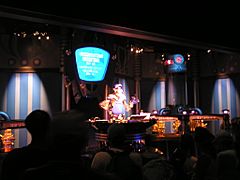 Sgt. 90210 briefs "recruits" (the guests) on prisoners in the Prisoner Teleport Center.

Guests enter the Galactic Federation Prisoner Teleport Center, where the attraction takes place. As the doors open, guests enter the first pre-show. Grand Councilwoman (voiced by Zoe Caldwell) will be shown on the television screens, telling the guests to be guards for the United Galactic Federation. After being taught the basic procedures of guard duty, guests enter the second pre-show, where they are introduced by a robot known as Sergeant C4703BK2704-90210 (Richard Kind). He performs a demonstration of the teleportation tubes using an alien named Skippy, who appeared in the former ExtraTERRORestrial Alien Encounter. After the demonstration, Captain Gantu (Kevin Michael Richardson) gives an alert of a Level 3 prisoner being beamed to the center, at which point Sergeant 90210 faints. Guests are then instructed by Pleakley (Kevin McDonald) over a public-address system to proceed to the High Security Level 3 prisoner teleportation chamber.

Inside the chamber, guests take a seat and the shoulder restraints lower into place (to not confuse the prisoner's DNA with the guests'). On screens, First Officer Ombit and Ensign Getco will be helping guests with the demonstration. The prisoner is then beamed into the chamber via a large plume of smoke and was revealed to be Experiment 626 (Chris Sanders), who calls himself "Stitch" despite not having met Lilo Pelekai yet. Gantu tells Ombit, Getco, and the guests to keep an eye on Stitch, while he goes straighten all this out on the Level 3 prisoners.

Stitch begins to spit water in any direction, as Ombit and Getco say, "What's going on? The cannons are misfiring!" The computer tells that the power is reducing after each spit. Following the second spit, Stitch laughs and Ombit explains, "I can't believe it! He's shutting down the system!" The third spit leads to the screens powering down. As the computer says, "Power decreasing 80%", the TV screens turn off and smoke effects begin to blast as Stitch says, "Meega, nala kweesta!" Loud explosions can be heard as all the lights in the chamber go out, allowing Stitch to escape. Now in complete darkness, Ombit and Getco say, "The prisoner has escaped!" and tell the guests to stay seated and do not let the prisoner out of their sight. As the recruits go fix the problem, Stitch destroys a cell phone. He begins to stalk the guests, tickling their heads and jumping on the shoulder restraints. Guests can hear Stitch scurry around the chamber in the speakers as he smells something good. Stitch sneaks into an office as he and a staff member say, "Hey! Give me back my chili dog! My chili dog! Mine! Give me back my chili dog! Mine! All mine!" He steals the staff member's chili dog and eats it all up. Soon afterwards, Stitch makes a big burp, causing a noxious smell to spray into the chamber. As the smell terrorizes the guests, Stitch says, "Meat. Onions."

Gantu returns to the chamber and says, "Ensign Getco. What is going on in there?" The recruits answer his question by saying that the prisoner is loose. When the power comes back on, the laser cannons continue their attempt to bring Stitch down. Again using the cannons' fatal flaws, he manages to fire the laser cannons into the crowd. As the lights and TV screens in the chamber are turned off a second time, Stitch begins to leap onto the shoulder restraints by saying, "Bouncing! Boing!" and terrorizes the guests for a second time and uses his antennas to tickle the guest's heads. Then, he reappears in the teleportation tube and escapes to the Magic Kingdom in Florida (pronounced by the characters as "Flor-ee-da"). Cameras capture him going into Cinderella Castle where Stitch gets into the castle by claiming to be Prince Charming from Cinderella. Stitch crawls in and says, "Yoo-hoo, oh Cinderella, your prince is here." Off-camera, Cinderella (Jennifer Hale) realizes that Stitch is not her prince, and kicks him out of the room. Stitch then licks the camera on the screens. The original ending of the attraction had Stitch stalk park guests on Astro Orbiter, with the ending video changing depending on the time of day at the park. This ending was eventually swapped in March 2005. The guests are then released from their restraints and exit into one of two gift shops; Merchant of Venus or Star Traders (previously Mickey's Star Traders during the attraction's run). On the way to the gift shops, guests see a sign labeled "Days without an escape" and a big number going down, along with "wanted posters" featuring some of Stitch's creator Jumba Jookiba's other genetic experiments.

The attraction included much of the technology and sets from its predecessor, the ExtraTERRORestrial Alien Encounter, including the comical alien Skippy in the second pre-show area. The two 39-inch Audio-Animatronic Stitch figures built by Imagineering were reportedly one of the most complex creations of their size. Other special effects include binaural sound, simulated laser cannons and a pungent smell of a chili dog.

All content from Kiddle encyclopedia articles (including the article images and facts) can be freely used under Attribution-ShareAlike license, unless stated otherwise. Cite this article:
Stitch's Great Escape! Facts for Kids. Kiddle Encyclopedia.