Stony Run is a tributary of Little Catawissa Creek in Schuylkill County, Pennsylvania, in the United States. It is approximately 2.2 miles (3.5 km) long and flows through Union Township. The watershed of the stream has an area of 2.24 square miles (5.8 km2). The stream is polluted and acidic. However, it is considered to be a coldwater fishery. The main rock formations in the stream's watershed are the Mauch Chunk Formation and the Pocono Formation. The main soils in the watershed are the Leck Kill soil and the Hazleton soil. No fish inhabit the stream. 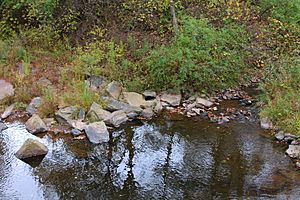 Stony Run (right) at its confluence with Little Catawissa Creek

Stony run experiences some form of pollution. The stream is also highly acidic because it has been significantly impacted by acid precipitation.

For approximately its lower half, Stony Run is flanked by areas that are prone to flooding during a 100-year flood.

Stony Run is in the United States Geological Survey quadrangles of Shumans, Nuremberg, Ashland, and Shenandoah.

Stony Run is considered by the Pennsylvania Department of Environmental Protection to be a Coldwater Fishery. A 1997 report advised against additional management actions on the stream due to low water quality and also suggested that the Pennsylvania Fish and Boat Commission not manage the stream for the same reason. The stream cannot support fish life due to the fact that it has been affected by acid precipitation.

A 1997 report stated that Stony Run was a poor site for angling.

All content from Kiddle encyclopedia articles (including the article images and facts) can be freely used under Attribution-ShareAlike license, unless stated otherwise. Cite this article:
Stony Run (Little Catawissa Creek tributary) Facts for Kids. Kiddle Encyclopedia.