Stratford is a town in Garvin County, Oklahoma, United States. Prior to Oklahoma statehood in 1907, the town existed under different names and was in the Chickasaw Nation in a geographic region known as Indian Territory. Peach orchards abound in and around the town. The population was 1,525 at the 2010 census. 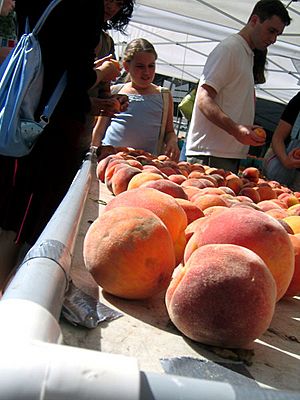 Stratford is the self-proclaimed Peach Capital of the World.

Stratford was originally the town of McGee, which was established in 1891. At the time, it was part of the Chickasaw Nation in an unorganized geographic region of the United States known as Indian Territory In 1906 the Oklahoma Central Railroad built the railroad two miles south of McGee. The town placed its buildings on wagons and wheeled them down to the train tracks. The new town was first named Walling, but by October 1906 the name was changed to Stratford. Stratford is known as the Peach Capital of the World and holds its Peach Festival, annual rodeo, and car show the third Saturday each July. The festival has been held since 1976, while the rodeo dates back to 1936.

Stratford lies in a part of Oklahoma known for hills of 250 to 400 feet (120 m), oak forests and flat, fertile plains. There are more than 400 acres of peach orchards in and around the town.

There were 609 households, out of which 32.8% had children under the age of 18 living with them, 43.0% were married couples living together, 16.7% had a female householder with no husband present, and 33.0% were non-families. 29.1% of all households were made up of individuals, and 13.1% had someone living alone who was 65 years of age or older. The average household size was 2.50 and the average family size was 3.09.

All content from Kiddle encyclopedia articles (including the article images and facts) can be freely used under Attribution-ShareAlike license, unless stated otherwise. Cite this article:
Stratford, Oklahoma Facts for Kids. Kiddle Encyclopedia.