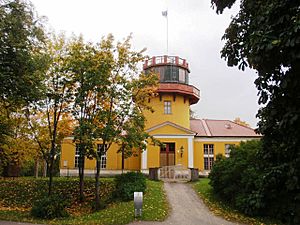 Tartu Old Observatory, the first point of the arc. 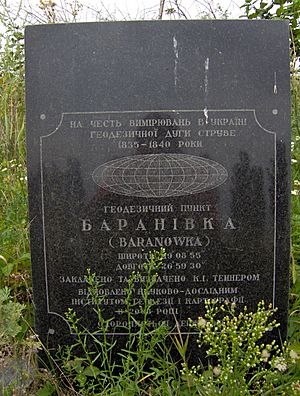 The commemorative plaque of the arc in Baranivka, Ukraine

The Struve Geodetic Arc is a chain of survey triangulations that go from Hammerfest in Norway to the Black Sea. They go through ten countries and over 2,820 km. It made the first accurate measurement of a meridian arc.

The chain was made and used by the German-born Russian scientist Friedrich Georg Wilhelm von Struve in the years 1816 to 1855. He did this to find the exact size and shape of the earth. At that time, the chain passed through two countries: Union of Sweden-Norway and the Russian Empire. The Arc's first point is in Tartu Observatory. This is where Struve did much of his research.

In 2005, the chain was added on the World Heritage List. There are 34 plaques or obelisks out of the original 265.

All content from Kiddle encyclopedia articles (including the article images and facts) can be freely used under Attribution-ShareAlike license, unless stated otherwise. Cite this article:
Struve Geodetic Arc Facts for Kids. Kiddle Encyclopedia.