Originally called Deer Creek Community, the area was settled mainly by people of German ancestry, mainly Pennsylvania Dutch. By 1857, six families were living in the vicinity. Descendants of the original founders still reside in the community. In 1859, the settlers organized the Evangelical Emmanuel Church and by 1867 the members had collected enough funds to construct a stone church on land donated by Jacob Hildenbrand for that purpose and a cemetery. Until 1908, the sermons were preached in German.

The Stull Church of Christ was started in 1907, and by 1913 a frame church was built in town. A post office was established on April 27, 1899 and was named Stull after the first and only postmaster Sylvester Stull. The post office was discontinued in 1903. In the early 1920s, plans for a bank and an electric railway extension through Lawrence to Emporia were cancelled.

In the early 20th century, Stull suffered two tragedies. A young boy was found burned to death after his father had finished burning a field and a man was found hanging from a tree after going missing.

The old Evangelical Church, built in 1867, was torn down in March 2002. The church was subject to occult rumors and was often vandalized.

CR-1023) in Douglas County, which is 7 miles west of Lawrence and 10 miles east of Topeka. 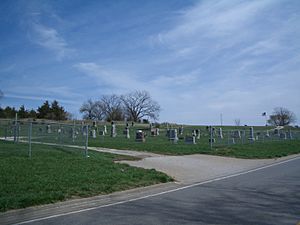 The Stull Cemetery has gained a dubious reputation due to urban legends involving Satan, the occult, and a purported "gateway to Hell". The 1867 stone church on the north side of the cemetery was knocked down in 2002.

Local police have discouraged curiosity seekers from entering the cemetery, especially on Halloween, and some people have been arrested for trespassing. When the cemetery is closed, trespassing could bring a maximum fine of $1,000 and up to six months in jail.

The band Urge Overkill released Stull EP in 1992, which features the church and a tombstone from the cemetery on the cover. Films whose plot is based on the legends include Sin-Jin Smyth, Nothing Left to Fear, and Turbulence 3: Heavy Metal. The cemetery is the site of the final confrontation of the Apocalypse in the "Swan Song" episode of season five of the television series Supernatural.

All content from Kiddle encyclopedia articles (including the article images and facts) can be freely used under Attribution-ShareAlike license, unless stated otherwise. Cite this article:
Stull, Kansas Facts for Kids. Kiddle Encyclopedia.