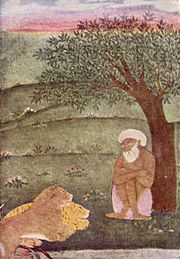 Dervish with a lion and a tiger, Mughal painting, c. 1650

A dervish or darvesh is a type of Sufi.

It is someone living a Sufi Muslim ascetic way or "Tariqah". They are poor, and live simply. In this respect, dervishes are most similar to mendicant friars in Christianity, or Hindu/Buddhist/Jain sadhus. 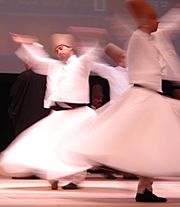 The whirling dance that is associated with dervishes is best known in the West by the performances of the Mevlevi order in Turkey. It is part of a ceremony known as the Sema. It is also done by other orders. The Sema is only one of many Sufi ceremonies performed to try to reach religious ecstasy (majdhb, fana).

The name Mevlevi comes from the Persian poet Rumi, who was a dervish himself. This practice, though not intended as entertainment, has become a tourist attraction in Turkey.

All content from Kiddle encyclopedia articles (including the article images and facts) can be freely used under Attribution-ShareAlike license, unless stated otherwise. Cite this article:
Dervish Facts for Kids. Kiddle Encyclopedia.