The Sun River (also called the Medicine River) is a tributary of the Missouri River in the Great Plains, approximately 130 mi (209 km) long, in Montana in the United States. 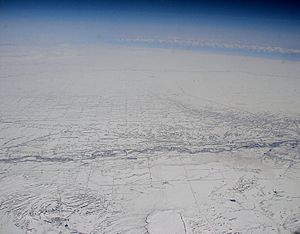 It rises in the Rocky Mountains in two forks, the North Fork and South Fork, which join in the Flathead National Forest above Gibson Reservoir along the county line between Teton and Lewis and Clark counties. It flows E, SE, and E away from the mountains, past Simms, Sun River, and Vaughn and joins the Missouri at Great Falls.

The water of the river is used extensively for irrigation, through the Sun River Project of the United States Bureau of Reclamation. The irrigation area covers approximately 92,000 acres (372 km2).

The Sun is a Class I river from Gibson Dam to its confluence with the Missouri River for public access for recreational purposes.

A sign located 3 miles south of Great Falls gives information on the history of the Sun River.

This river was called "The Medicine" by the Indians. On the return trip from the coast Capt. Lewis of the Lewis & Clark Expedition struck this river approximately 50 miles west of here. He followed it down to the Missouri passing near this point July 11, 1806. In his journal under that date he said:

All content from Kiddle encyclopedia articles (including the article images and facts) can be freely used under Attribution-ShareAlike license, unless stated otherwise. Cite this article:
Sun River Facts for Kids. Kiddle Encyclopedia.