Sunil Dutt (born Balraj Dutt; 6 June 1929 - 25 May 2005) was an Indian film actor, producer, director and politician. He was the Minister of Youth Affairs and Sports in the Manmohan Singh government (2004–2005). He was a former Sheriff of Mumbai. He is the father of actor Sanjay Dutt and politician Priya Dutt.

In 1968, he was honoured by the Padma Shri by the Government of India. In 1984 he joined the Indian National Congress party and was elected to the Parliament of India for five terms from the constituency of Mumbai North West.

Sunil Dutt was born on 6 June 1929 to father Diwan Raghunath Dutt and mother Kulwantidevi Dutt. in Nakka Khurd, Punjab Province, British India (now in Punjab, Pakistan). When he was five years old, Dutt's father died. When he was 18, the Partition of India began inciting Hindu-Muslim violence across the country. A Muslim named Yakub, who had been friend with Dutt's father, saved their entire family. The family resettled in the small village of Mandauli on the bank of the river Yamuna located in Yamuna Nagar, Punjab, which is now a district of Haryana. Later he moved to Lucknow with his mother, Kulwantidevi Dutt, and spent a long time in Aminabad during graduation. He then moved to Bombay (present-day Mumbai), where he joined Jai Hind College as an undergraduate and took up a job at the city's BEST Transportation Engineering division. He graduated with B.A. (Hons.) in History in 1954.

Starting out in radio, with his command over the Urdu language, Sunil Dutt was hugely popular on the Hindi service of Radio Ceylon, the oldest radio station in South Asia. He moved to acting in Hindi films and got introduced to the industry with 1955's Railway Platform. 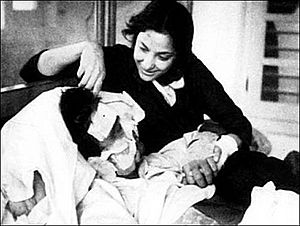 Debut and coining of the screen name "Sunil Dutt"

Director Ramesh Saigal was instrumental in giving Dutt a break in the film Railway Platform (1955) when the latter was hosting the show, Lipton Ki Mehfil on Radio Ceylon. While covering the Dilip Kumar film Shikast in 1953, Dutt met director Saigal, who impressed by his personality and voice, offered him a role in his upcoming film. Saigal came up with the new screen name "Sunil Dutt" for the debutante actor whose real name was Balraj Dutt to avoid name conflicts with the then veteran actor Balraj Sahni. 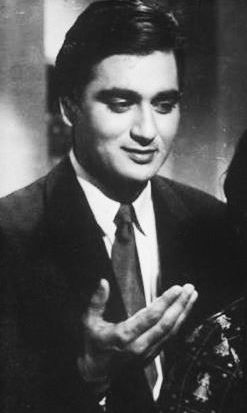 Dutt shot to stardom in the 1957 film Mother India in which he co-starred with Nargis as her short-tempered, angry son. During the making of this film a fire happened on the set. It is believed that Dutt braved the raging fire to save Nargis and thereby won her love. They went on to marry in 1958. They had one son Sanjay Dutt, also a successful film actor and two daughters, Priya Dutt and Namrata Dutt. His daughter Namrata married Kumar Gaurav, son of Rajendra Kumar. The two fathers were co-stars in Mother India.

Dutt was one of the major stars of Hindi cinema in the late 1950s and 1960s and continued to star in many successful films which included Sadhna (1958), Insan Jaag Utha (1959), Sujata (1959), Mujhe Jeene Do (1963), Khandan (1965), Mera Saaya (1966) and Padosan (1967). His collaboration with B.R. Chopra proved to be successful in films such as Gumraah (1963), Waqt (1965) and Hamraaz (1967). One of his favourite writers and friends was Aghajani Kashmeri. Dutt made his directorial debut and was the only actor to feature in the 1964 film Yaadein. The film was featured in the Guinness Book of Records for Fewest Actors in a Narrative Film. He later produced the 1968 film Man Ka Meet which introduced his brother Som Dutt, Vinod Khanna and Leena Chandavarkar. In 1971, he produced, directed and starred in Reshma Aur Shera (1971) which was critically well received but a box office failure.

He launched his son Sanjay's career with Rocky in 1981 which was a success. Shortly before the film's release, Nargis died of pancreatic cancer. He founded the Nargis Dutt Foundation in her memory for the curing of cancer patients. He was a sponsor of the India Project, an organisation akin to Operation Smile for the treatment of Indian children with facial deformities.

In 1982, he was appointed as the Sheriff of Bombay, an apolitical titular position bestowed on him by the Maharashtra government for a year.

He retired from the film industry in the early 1990s to turn to politics after his last few releases including Yash Chopra's Parampara (1992) and J.P. Dutta's Kshatriya (1993). His political career was halted for some years in the early 1990s when he worked to free his son from jail after he was arrested for keeping an AK-56 that he claimed was for protection of his family after bomb blasts in Bombay.

In 1995, he won the Filmfare Lifetime Achievement Award for his contribution to the film industry for four decades. He returned to acting shortly before his death in 2003's Munna Bhai M.B.B.S. in which he shared the screen with son Sanjay for the first time although they had appeared earlier in Rocky and Kshatriya but did not share any scenes together. 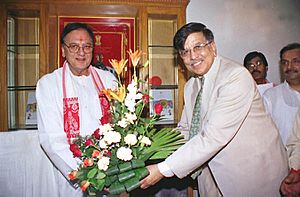 Sunil Dutt died of a heart attack on 25 May 2005 at his residence in Bandra, Mumbai, two weeks before his 76th birthday, At the time of his death, he was the Minister for Youth Affairs and Sports in the Union Government led by Dr. Manmohan Singh and was the Member of Parliament from North-west Mumbai. He was cremated with full state honours at Santacruz Crematorium in Mumbai. He was succeeded as Minister by Mani Shankar Aiyar. His seat in the Parliament was contested by his daughter, Priya Dutt, who won it and was a Member of Parliament until May 2014.

All content from Kiddle encyclopedia articles (including the article images and facts) can be freely used under Attribution-ShareAlike license, unless stated otherwise. Cite this article:
Sunil Dutt Facts for Kids. Kiddle Encyclopedia.