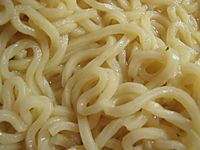 Super Noodles is the brand name of a dehydrated instant noodle snack, made by Batchelors in the United Kingdom (previously made by Kellogg's) and sold under the McDonnells brand in Ireland. They are prepared by being placed in a pot of boiling water, adding the sachet of flavouring, and stirring. Super Noodles can also be cooked and prepared using a microwave oven.

The brand is currently owned by Premier Foods in the United Kingdom, and Boyne Valley Group in Ireland. In February 2017, Premier released Super Noodles pots. The line up has "exceeded expectation", selling over 13 million units giving Premier its "strongest growth in five year".

Super Noodles To Go is a cup noodle sister product, competing with Pot Noodle. Rather than preparing the noodles in a saucepan of boiling water, the consumer pours boiling water into the cup of noodles and stirs. Flavours include Roast Chicken, however, the flavour differs from the standard Super Noodle range.

The convenience of the product targeted a male demographic in UK television commercials during the late 1990s. It featured the early performances of Martin Freeman, Peter Serafinowicz and Jake Wood in humorous situations reflecting British “Lad culture” of the era.

All content from Kiddle encyclopedia articles (including the article images and facts) can be freely used under Attribution-ShareAlike license, unless stated otherwise. Cite this article:
Super Noodles Facts for Kids. Kiddle Encyclopedia.