Sutter Creek (formerly spelled Sutter's Creek and Suttercreek; formerly named Suttersville is a city in Amador County, California, United States. The population was 2,501 at the 2010 census, up from 2,303 at the 2000 census. It is accessible via State Route 49.

Sutter Creek, known as the "Jewel of the Mother Lode," was named after John Sutter, who sent a party to the area in 1846 in search of timber. Sutter logged this area for a while before returning to his fort in Sacramento.

Sutter's discovery of gold at nearby Coloma in January 1848 triggered the California Gold Rush. After all his workers left him to go on their own hunts for gold, Sutter moved to Mormon Island with a couple of hands. After about two weeks miners flooded the island, so Sutter and his hands left and returned to Sutter Creek. Sutter said: "I broke up the camp and started on the march further south, and located my next camp on Sutter Creek, now in Amador County, and thought that I should be there alone. The work was going on well for a while, until three or four traveling grog-shops surrounded me, at from one-half to ten miles (16 km) distance from the camp. Then, of course, the gold was taken to these places, for drinking, gambling, etc., and then the following day they were sick and unable to work, and became deeper and more indebted to me, particularly the Kanakas [native Hawaiians]." Shortly thereafter Sutter moved out of Sutter Creek and back to his fort.

Although plenty of placer gold was found there, gold-bearing quartz deposits were discovered in 1851, and mining those deposits for gold became the mainstay of the local economy for many years. With the prosperity brought by quartz mining, Sutter Creek became a boomtown. By 1932, the Central Eureka mine, begun in 1869, had reached the 2,300-foot (700 m) level. By 1939, it was the best-paying mine in Sutter Creek. The mines continued operations until 1942, when most gold mines were closed for manpower reasons during World War II. The Central Eureka mine reopened after the war and then shut down for good in 1951.

Today, Sutter Creek is a tourist town with many shops and restaurants. The town itself is registered as California Historical Landmark #322. Many of the original brick buildings are still standing as are some of the mansions built by wealthier residents.

According to the United States Census Bureau, the city has a total area of 2.6 square miles (6.6 km²), all of it land.

According to the Köppen Climate Classification system, Sutter Creek has a hot-summer Mediterranean climate, abbreviated "Csa" on climate maps. Summers are long and hot, while winters are cool but relatively short. As typical of mediterranean climates, precipitation is concentrated to winter months, with summers being extremely dry. 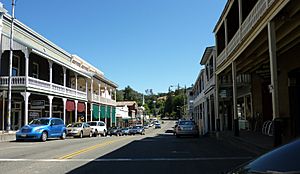 All content from Kiddle encyclopedia articles (including the article images and facts) can be freely used under Attribution-ShareAlike license, unless stated otherwise. Cite this article:
Sutter Creek, California Facts for Kids. Kiddle Encyclopedia.