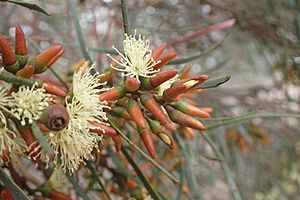 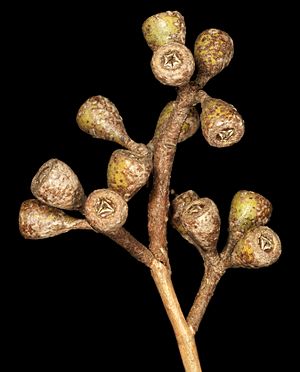 Eucalyptus spathulata, commonly known as swamp mallet, narrow leaved gimlet or swamp gimlet, is a species of mallet that is endemic to Western Australia. It has a dense crown, smooth, satin-like bark, glossy green, linear leaves, flower buds in groups of three or seven, white flowers and cup-shaped to conical fruit.

Eucalyptus spathulata was formally described in 1844 by botanist William Jackson Hooker in his book Icones Plantarum, from specimens collected near the Swan River by James Drummond. The specific epithet (spathulata) is from the Latin word spathulatus, meaning spoon-like or a broad rounded upper part tapering gradually downward into a stalk. Why the name was chosen is unknown.

Two subspecies are recognised by the Australian Plant Census:

Swamp mallet is found on flats, broad valley floors, on rises, in and around saline depressions and along the edges of salt lakes in the southern Wheatbelt and inland Great Southern regions of Western Australia where it grows in sandy or sandy-clay soils over granite. Subspecies spathulata is found in the Blackwood River and Pallinup River drainage systems. Subspecies salina is restricted to the more northerly Salt River catchment.

Subspecies spathulata is classified as "not threatened" in Western Australia by the Western Australian Government Department of Parks and Wildlife, but subspecies salina is listed as "Priority Three", meaning that it is poorly known and known from only a few locations but is not under imminent threat.

Eucalyptus spathulata has a high to moderate growth rate and can live to over 15 years. It is widely cultivated in southern Australia and can be grown in saline and poorly drained situations. The tree's wood is dense, hard and pale brown in colour and can be used as a source of fuelwood and craftwood. It is planted in gardens as an ornamental and as a windbreak, and produces pollen desirable for apiculture. The bark is rich in tannin and the leaves contain cineole. The tree is both drought and frost tolerant and can withstand salt laden winds. The tree has also been cultivated in California.

All content from Kiddle encyclopedia articles (including the article images and facts) can be freely used under Attribution-ShareAlike license, unless stated otherwise. Cite this article:
Swamp mallet Facts for Kids. Kiddle Encyclopedia.