Tabor is a city in Fremont County and extends northward into Mills County in the U.S. state of Iowa. The population was 928 at the time of the 2020 census.

According to the United States Census Bureau, the city has a total area of 1.29 square miles (3.34 km2), all of it land. 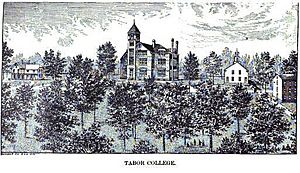 In 1852 the city of Tabor was founded by several Christian clergymen, who were also active abolitionists, (George Gaston, Samuel A. Adams, and Rev. John Todd) and their families. They chose to settle in what is now Tabor in order to found a Christian college, which eventually became Tabor College. The founders "were impressed with this high location and mutually selected the name "Tabor" after the Biblical name of Mount Tabor, a mountain near Nazareth, the town of Jesus' childhood." In the 1850s the abolitionist John Brown kept a store of weapons in Tabor, and met here with other supporters to plan his raids in Kansas and Virginia, including the Raid on Harpers Ferry. The town was the home of many abolitionists, including John Todd, a 'conductor' on the Underground Railroad and co-founder of Tabor College. Tabor College was located in the city from 1853 to 1927 before it closed its doors for financial reasons. The college's buildings housed German P.O.W.s during World War II. The only building remaining from the college has now been subdivided into apartments.

There were 418 households, of which 29.9% had children under the age of 18 living with them, 50.2% were married couples living together, 10.0% had a female householder with no husband present, 4.8% had a male householder with no wife present, and 34.9% were non-families. 31.6% of all households were made up of individuals, and 15% had someone living alone who was 65 years of age or older. The average household size was 2.34 and the average family size was 2.95.

All content from Kiddle encyclopedia articles (including the article images and facts) can be freely used under Attribution-ShareAlike license, unless stated otherwise. Cite this article:
Tabor, Iowa Facts for Kids. Kiddle Encyclopedia.