Kids Encyclopedia Facts
In this Japanese name, the family name is Takizawa. 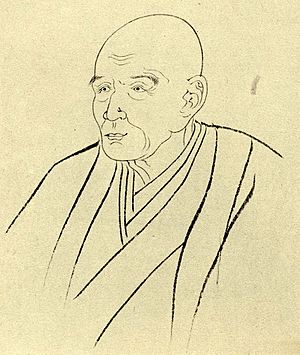 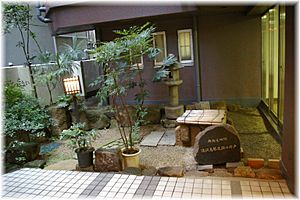 The well at Takizawa Bakin's house

Takizawa Bakin (曲亭 馬琴code: ja is deprecated ), a.k.a. Kyokutei Bakin (曲亭 馬琴code: ja is deprecated , 4 July 1767 – 1 December 1848), was a late Japanese Edo period gesaku author best known for works such as Nansō Satomi Hakkenden (The Chronicles of the Eight Dog Heroes of the Satomi Clan of Nansō) and Chinsetsu Yumiharizuki (Strange Tales of the Crescent Moon). Both are outstanding examples of nineteenth-century yomihon, or "books for reading" (as opposed to kusazōshi, or "picture books"). Bakin published more than 200 works in his life, the longest of which was the Nansō Satomi Hakkenden consisting of 106 books.

In his diaries, Bakin wrote that his father, a heavy drinker, was devoted to scholarship and the classics, and diligent in his work as a samurai. He died in 1775, when Bakin was only nine years old, having aggravated his gout through drinking. Bakin's family stipend was soon reduced by half, and in December of the following year, Rabun gave up his service to the Matsudaira clan in favor of living as a rōnin. Bakin and his family were forced into a much smaller dwelling as a result.

Eventually Rabun received a new post, and in 1778 Bakin's mother pretended to be sick in order to move in with him. Bakin had been placed in service of the Matsudaira lord's grandson, but was treated cruelly and ran away when only 14. He left the following haiku as a note explaining his reasons for leaving:

Chilled by winter winds
I have decided
To journey with the gods.

Between 1804 and 1815, Bakin and Hokusai collaborated on 13 works, and Hokusai's creative and attractive illustrations further boosted Bakin's popularity. In particular, Chinsetsu Yumiharizuki (Strange Tales of the Crescent Moon, 椿説弓張月) a historical fiction novel published between 1807 and 1811 which borrowed the concept of The Tale of Hōgen, Taiheiki and Water Margin, was a masterpiece collaborated by Bakin and Hokusai, and became one of Bakin's masterpieces along with Nansō Satomi Hakkenden. Chinsetsu Yumiharizuki describes Minamoto no Tametomo's activities in the Hōgen rebellion and the foundation of the Ryukyu Kingdom. There are various theories as to why they dissolved their cooperation, such as discordant personalities and conflicting opinions on how to draw illustrations. His Chinsetsu Yumiharizuki (Strange Tales of the Crescent Moon) was adapted for the kabuki stage by Yukio Mishima.

Nansō Satomi Hakkenden (The Chronicles of the Eight Dog Heroes of the Satomi Clan of Nansō) took 28 years to complete (1814–1842), and Bakin grew blind and lost his wife and son before he completed it. Comprising 106 volumes, it is one of the world's longest novels. The final parts of the work were dictated to his daughter-in-law. Although he was born of lower samurai birth, Bakin renounced his status to become a writer. His works center on samurai themes, including loyalty and family honor, as well as Confucianism, and Buddhist philosophy. A series of ukiyo-e containing 50 pictures depicting characters from Nansō Satomi Hakkenden and featuring leading kabuki actors was created by Utagawa Kunisada II. These prints were published in the early 1850s by Tsutaya Kichizo. Excerpts translated by Chris Drake are included in Early Modern Japanese Literature: An Anthology, 1600-1900, edited by Haruo Shirane (Columbia University Press, 2002). The Eight Dog Chronicles has been adapted many times in, for example, the anime OVA The Hakkenden.

All content from Kiddle encyclopedia articles (including the article images and facts) can be freely used under Attribution-ShareAlike license, unless stated otherwise. Cite this article:
Takizawa Bakin Facts for Kids. Kiddle Encyclopedia.