Kids Encyclopedia Facts
Not to be confused with the Taku Arm of Tagish Lake.

The Taku River (Lingít: T'aaḵu Héeni) is a river running from British Columbia, Canada, to the northwestern coast of North America, at Juneau, Alaska. The river basin spreads across 27,500 square kilometres (10,600 sq mi). The Taku is a very productive salmon river and its drainage basin is primarily wilderness.

During the 18th and early 19th centuries, the Taku Indians controlled the trade routes on the river and compelled natives of the Interior to use them as middle-men, instead of allowing trade directly with white settlers.

The Hudson's Bay Company established a trading post called Fort Durham, also known as Fort Taku, near the mouth of the Taku River in the early 1840s to take advantage of the natural trade route. However, by 1843, Fort Durham had been abandoned as unprofitable.

Although a major river, the Taku's name does not extend to its headwaters. Its name begins at the confluence of the Inklin and Nakina Rivers, which is the location of the tiny community of Inklin. The Inklin's name also only extends upstream to the confluence of the Nahlin and Sheslay Rivers, which the Nakina's main tributaries are the Sloko and Silver Salmon Rivers.

One account of its name is that "Taku" is the Tlingit language word for "salmon" but the Taku Tlingit name for themselves T'aaku Kwáan translates as "Geese Flood Upriver Tribe"". There are also two kwaans of the Tlingit people inland in British Columbia, the Áa Tlein Kwáan ("Big Lake Tribe", today organized as the Taku River Tlingit First Nation) and the Deisleen Kwáan ("Big Sinew Tribe", today organized as the Teslin Tlingit Council); the territory of the former includes those areas of the Taku basin in British Columbia.

In addition to the Inklin and Nakina Rivers, from which it is formed, other tributaries of the Taku proper include the Tulsequah River.

The Taku River is an important contributor to the economies of Southeast Alaska and British Columbia, especially for its commercial, sport and personal-use fisheries. A detailed report released in 2004 by the McDowell Group notes $5.4 million in total U.S. commercial harvest and processing output, including 80 jobs and $1.4 million in labor income. British Columbia added over $750,000 more. 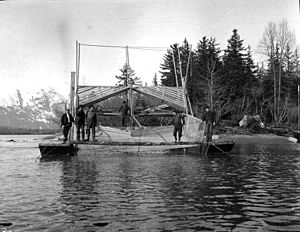 Fishwheel on the Taku River, May 1908

Other activities, including commercial air, guided river excursions, hunting and property taxes added still more to the general regional economy. the report mentioned above estimated "the annual economic impact from all activities on the Taku River to be $26.7 million," most of it, about $18 million, from commercial air activity directly related to tourism.

Periodically, the Taku River reaches flood stage (43 ft) or above. Records of the Advanced Hydrologic Prediction Service (AHPS), a branch of the National Weather Service, show that in the last two decades the river crested above 43 feet (13 m) six times. The highest level reached in that period was 45.07 feet (13.74 m) on June 25, 2004. As of Aug. 12, 2009, the highest registered level for 2009 occurred on July 24 when the river crested at 43.17 feet (13.16 m). More information is available at the AHPS website. Also see The Taku River fills Tulsequah Lake during peak flow, causing lake outburst events most years. As the lake swells the water can float or melt the glacier enough to trigger sudden releases.

Past mining activity and the potential for future mining on the Canadian side of the border led the State of Alaska to take recent habitat protection steps. In January 2009, the Alaska Department of Natural Resources' Division of Coastal and Ocean Management approved a request from the Alaska Department of Fish and Game to designated the entire U.S. portion of the Taku River as "important habitat," a designation that put the stretch of river within the purview of protective provisions in Alaska law that require those applying for certain river use permits "avoid, minimize, or mitigate significant adverse impacts to the special productivity of the habitat." In February, the director of the division rescinded the designation for a portion of the U.S. river below the Canada–United States border. The important habitat designation remains in place, however, for a 16-mile (26 km) section beginning at the river's mouth near Juneau, Alaska. Several organizations are working to win further habitat conservation protections for the river, including Rivers Without Borders and the Alaska Marine Conservation Council.

All content from Kiddle encyclopedia articles (including the article images and facts) can be freely used under Attribution-ShareAlike license, unless stated otherwise. Cite this article:
Taku River Facts for Kids. Kiddle Encyclopedia.