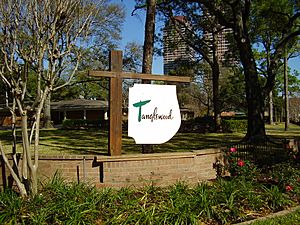 Tanglewood is a neighborhood in western Houston, Texas, located off of San Felipe Road.

William Giddings Farrington developed Tanglewood beginning in the 1930s. Tanglewood opened in 1949. The Farrington family took the name Tanglewood from "Tanglewood Tales" by Nathaniel Hawthorne. The book was a favorite of Farrington's daughter, Mary Catherine Farrington. For the first six months, no houses were sold in Tanglewood. Mary Catherine, who later took the family name Miller, said that the lack of sales caused stress for the family. After several heavy rainstorms resulted in floods that affected other areas in Harris County, potential buyers began inquiring about buying houses in Tanglewood because they heard that the neighborhood had high water drainage capabilities.

Tanglewood is within a several minute driving distance of Downtown Houston. The area has around 5,000 trees. Before the subdivision was developed, Tanglewood was a coastal prairie that experienced regular grass fires, preventing the growth of trees. After Tanglewood was built, wildfires were suppressed. As of 1997, developers building area real estate projects negotiated with area tree preservationists to keep as many trees in their developments as possible.

In 1992 John Daugherty, a real estate agent, said that Tanglewood is "a very low-key, unassuming neighborhood. A lot of CEOs and top management officials would live there."

Its original homes were "rambling Ranch" houses, spread-out one story houses placed on large lots. The houses were outfitted with central air conditioning. Tanglewood's first houses each had a price tag of around $25,000 ($223459.38 in current money); the houses were four times as expensive as the houses in Farrington's Southdale area in Bellaire. In 2003 the remaining original houses had been outfitted with expensive finishes. In 1994 an older house with no improvements was priced at around $350,000 ($503085.59 in current money).

Newer houses began replacing older houses in the 1980s, and as of 2003 newer houses make up a majority of the housing stock. Newer houses included two story English-style brick and stone houses and Mediterranean stucco style houses with clay roofs. Many newer houses have 11-foot (340 cm) ceilings, three car garages, and wine cellars. Katherine Feser of the Houston Chronicle said that Tanglewood lots were "well-suited" for the newer types of houses that had been built. In 1994 there was one popular house style influenced by the Italian designer Andre Palladio, which featured stucco, symmetrical design, tile roofs, and arched windows. During that year most newer houses had prices beginning at $800000 ($1149909.91 in current money). Mary Catherine Miller, the daughter of Farrington, said that Tanglewood "offers all of the amenities of a well-planned community and it has really stood the test of time. This is obvious with the new homes that are being built."

Claudia Feldman of the Houston Chronicle said that, in the 1960s, Tanglewood was "a white-bread community, devoid of the color and international cultural mix for which Houston was about to become famous" that had a "clubby atmosphere". Feldman explained that "Tanglewoodies seemed to patronize the same grocery store, pharmacy, hardware store and cleaners. They aspired to the same country club, supported the same conservative politicians, and attended a short list of predominantly white, politically correct churches." Feldman added that "irreverent, have-not types occasionally accused Tanglewoodies of being bland and boring" and characterized the houses as "overgrown tract houses."

The city of Houston operates the Tanglewood Park at 5801 Woodway.

Around 2003 several city-financed improvements were being added to Tanglewood Park. During that year, children from Tanglewood had engaged in a coin collecting drive so that a playground could be added.

All content from Kiddle encyclopedia articles (including the article images and facts) can be freely used under Attribution-ShareAlike license, unless stated otherwise. Cite this article:
Tanglewood, Houston Facts for Kids. Kiddle Encyclopedia.