Taumata­whakatangihanga­koauau­o­tamatea­turi­pukaka­piki­maunga­horo­nuku­pokai­whenua­ki­tana­tahu is a hill near Porangahau, south of Waipukurau in southern Hawke's Bay, New Zealand. The height of the hill is 305 metres (1,001 ft). The hill is notable primarily for its unusually long name, which is of Māori origin; it is often shortened to Taumata for brevity. It has gained a measure of fame as it is the longest place name found in any English-speaking country, and possibly the longest place name in the world; according to World Atlas. The name of the hill (with 85 characters) has also been listed in the Guinness World Records as the longest place name. Other versions of the name, including longer ones, are also sometimes used.

Meaning of the name

The name "Taumata­whakatangihanga­koauau­o­tamatea­turi­pukaka­piki­maunga­horo­nuku­pokai­whenua­ki­tana­tahu" translates roughly as "The summit where Tamatea, the man with the big knees, the slider, climber of mountains, the land-swallower who travelled about, played his kōauau (flute) to his loved one".

Some forms of the name are longer still: "Taumata­whakatangihanga­koauau­o­tamatea­ure­haea­turi­pukaka­piki­maunga­horo­nuku­pokai­whenua­ki­tana­tahu" has 92 letters. An even longer version, Taumata-whakatangihanga-koauau-o-Tamatea-haumai-tawhiti-ure-haea-turi-pukaka-piki-maunga-horo-nuku-pokai-whenua-ki-tana-tahu, has 105 letters and means "The hill of the flute playing by Tamatea – who was blown hither from afar, grazed his knees climbing mountains, fell on the earth, and encircled the land – to his beloved one".

Tamatea, explorer of the land

Tamatea-pōkai-whenua (Tamatea the explorer of the land) was the father of Kahungunu, ancestor of the Ngāti Kahungunu iwi (tribe). Mention of Tamatea's explorations of the land occur not only in Ngāti Kahungunu legends, but also in the traditions of iwi from Northland, where he is said to have explored the Hokianga and Kaipara harbours.

In traditions from the Bay of Plenty region, he left a son, Ranginui, who is the ancestor of Ngāti Ranginui of Tauranga. Legends from the East Coast of the North Island tell of his explorations in Tūranga-nui (Gisborne), Māhia, Wairoa, Ahuriri (Napier), Heretaunga (near Hastings) and Pōrangahau. He travelled via the Mangakopikopiko River, over the Tītī-o-kura saddle via Pohokura to Lake Taupo. The Ōtamatea River and swamp is named after him. Tamatea is also the name of a place in Napier.

Early South Island legends say that Tamatea sailed down the east coast. His canoe was wrecked in the far south, and transformed into Tākitimu mountain range. Tamatea then returned to the North Island, and travelled via the Whanganui River. 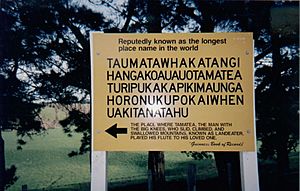 All content from Kiddle encyclopedia articles (including the article images and facts) can be freely used under Attribution-ShareAlike license, unless stated otherwise. Cite this article:
Taumatawhakatangi­hangakoauauotamatea­turipukakapikimaunga­horonukupokaiwhen­uakitanatahu Facts for Kids. Kiddle Encyclopedia.