Tenney is an unincorporated community and former city in section 28 of Campbell Township, Wilkin County, Minnesota, United States. A post office was established there in 1887, and Tenney was incorporated as a city on November 30, 1901. The population was 5 at the 2010 census, tying Tenney with Funkley as Minnesota's least populous community. It is part of the Wahpeton, ND–MN Micropolitan Statistical Area. Tenney's main economic feature is a grain elevator near its southern border.

According to the United States Census Bureau, the city has a total area of 0.02 square miles (0.05 km2), all of it land.

Tenney is located in the flat basin of prehistoric Lake Agassiz, a glacial lake that existed at the end of the last Ice Age. The area's remarkably flat land is sometimes described as the upper valley of the Red River of the North, though it is not technically in the Red River valley, but is near the Bois de Sioux River.

The city of Tenney was named for the owner of its site, lumberman John P. Tenney, because of his willingness to give land to the railroad, which came through in 1885. The first house was built by his son-in-law, Fred Maechler. The post office was established in 1887, the plat was filed for record with the office of the Register of Deeds in Wilkin County on August 4, 1887, and the city was incorporated on November 30, 1901. The city originally encompassed four square miles, but never grew enough to meet its boundaries, so in 1916 the farmers petitioned their land from the city, and their request was granted. According to an unpublished town history written in the mid-1980s, the city's population peaked at about 200 in 1910. Before 1910 the city boasted a church, three grain elevators, a hardware store, two mercantile stores, a butcher shop, bank, machine shop, implement shop, blacksmith shop, pool hall, lumberyard, and a hotel, which also housed the barber shop, saloon, and post office. In 1909 a small post office building was erected and used until 1952, when Leonard Hardie became postmaster and moved the post office to the general store. Electricity arrived in Tenney in 1914, through a franchise granted to Otter Tail Power Company.

After 1910 steady population decline was driven by the lack of significant population in outlying areas, migration to larger urban centers, and the absence of dynamic economic factors to generate wealth. The hardware store closed in 1928 and the bank, like thousands of other undercapitalized small-town banks in the United States, went out of business in 1929 or 1930 in the aftermath of the stock market crash of 1929. U.S. Census bureau data indicates that the population fell to 102 in 1920, 80 in 1930, rose slightly to 89 in 1940, and fell to 62 in 1950, 35 in 1960 and 24 in 1970. As local establishments burned down or went out of business they were not replaced, and finally the post office was discontinued in 1980 when the census bureau pegged Tenney's population at 19. Today the only remaining business in town is the elevator. The only commercial building remaining on the main drag is the former James Bigsby general store, later the G.A. Klugman general store, which also housed the post office until its closing in 1980. The building was vacant for several years, but was recently purchased and is being rehabilitated.

The population reached its lowest point of 2 sometime after the 2000 census, but had risen to 5 by the 2010 census.

In late June 2011, residents of Tenney voted 2 to 1 to dissolve the town and have it become part of Campbell Township.

The community encompasses two and a half blocks, including one vacant commercial building (the old general store and post office, now being remodeled into a restaurant), a church building (now the city hall), a community center, three inhabited homes, and one vacant dwelling. The ruins of the Tenney School, a two-room brick schoolhouse which was built in 1907 and operated until the 1950s, are visible at the northwest corner of town, and the Wheaton-Dumont Elevator runs the length of town on the south side along Minnesota Highway 55. The old Tenney Fire Hall is on the east side of Corcord Avenue.

Tenney is on Minnesota Highway 55 in far western Minnesota. It is about 2 miles (3.2 km) east of the junction of Minnesota Highway 55 and US Route 75. It is six miles (10 km) east of Fairmount, ND; 63 miles (101 km) south of Moorhead, MN; and 170 miles (270 km) northwest of Minneapolis, MN. It is at roughly the same longitude as Tulsa, OK and Dallas, TX, and approximately the same latitude as Walla Walla, WA and Montreal, Quebec. 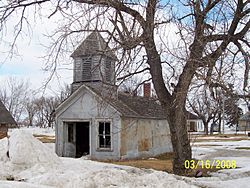 The Tenney Fire Hall, listed on the National Register of Historic Places, was a small wood-frame building with a bell tower and flag mast, built in 1904. It housed the town's two hand-pulled chemical fire engines. The rearmost part of the building also contained the town jail. This building is now privately owned, but the city is hopeful of reacquiring it and performing important repairs. According to the National Register's Inventory-Nomination Form, the Fire Hall is significant for the following reasons:

The City Hall was at 295 Concord Avenue (Concord is the town's main north-south street). It is open to the public 24 hours a day and 365 days a year. Visitors are invited to come inside and sign the town's guestbook. City Hall was built in the early 1900s as a community church. Later it was a Baptist church. From 1914 to 1946 it was the Evangelical church, from 1946 to 1968 the Evangelical United Brethren church, and from 1968 until closing in 1997 it was the Tenney United Methodist Church. The building was purchased by the city for $11 in 1999, and in 2006-07 underwent significant renovation and expansion.

The Co-op had its primary rail terminal in Tenney. In 2003, 20 million bushels of grain were trucked into Tenney from other elevators and shipped out by rail. At that time it was estimated that in 2004 this figure would rise to 32 million bushels. The elevator is served by the Soo Line Railroad, which is the United States arm of the Canadian Pacific Railway.

There were 4 households out of which none had children under the age of 18 living with them, 50.0% were married couples living together, and 50.0% were non-families. 50.0% of all households were made up of individuals and 50.0% had someone living alone who was 65 years of age or older. The average household size was 1.50 and the average family size was 2.00.

All content from Kiddle encyclopedia articles (including the article images and facts) can be freely used under Attribution-ShareAlike license, unless stated otherwise. Cite this article:
Tenney, Minnesota Facts for Kids. Kiddle Encyclopedia.