Thai Town (Thai language: ไทยทาวน์) is a six-block area in the East Hollywood neighborhood of Los Angeles, California; it is the only designated "Thai Town" in the United States. 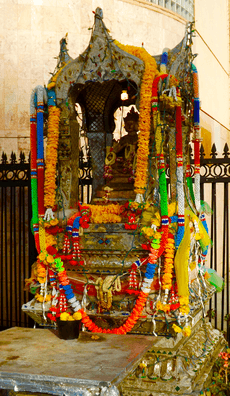 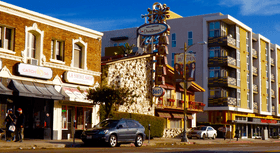 Motel (center) and two other buildings on Hollywood Boulevard in Thai Town, 2015

The area designated by the city of Los Angeles as Thai Town is a six-block area flanking Hollywood Boulevard between Normandie Avenue and Western Avenue, its entrances being marked by two statues of apsonsi (a mythical half human, half lion angel in Thai folklore). The district has been the home to immigrant groups, including Armenians and Latinos, for a long time, and Thai Americans began settling there in the 1960s. The area, which is home to many of the 80,000 Thais estimated to be living in Southern California, was said to be a working-class district that in 2007 was "one of the poorest sections of Los Angeles County, with many residents cramming into low-income apartments and working at minimum-wage jobs." Earlier, in 2000, it was described as "a rundown six-block stretch of Hollywood Boulevard crammed with Thai sweet shops, bookstores, restaurants, markets and newspaper offices."

gourmands can stock up on bitter melon and round Thai eggplant. A Thai dessert shop offers preserved jackfruit, Pandan cookies and Kring Krang, crisply sweetened rice. The large Silom supermarket occupies the middle of a block near Hobart Boulevard, its exterior the rose-hued color of dusk with ornate trimming and a spirit house, draped with colorful garlands and a stone-faced Buddha image, guarding the entrance from destructive forces.

One result of the influx of Thai people into East Hollywood was that the neighborhood became a "point of entry" for other Thais, many of whom came to study at Southland universities.

Armenian immigrants own much of the property and live in the surrounding apartment buildings. One newspaper writer commented in 2000 that the neighborhood's ethnic politics are "complex and layered."

Data for the area show that 27% of households live below the poverty line—a rate 12 percentage points higher than the county average. Fueling the persistent poverty has been the arrival of thousands of working-class Thai immigrants in the last two decades who have flooded sweatshops, restaurant kitchens and, most recently, massage parlors, said Chancee Martorell, executive director of the Thai Community Development Center, which has conducted several studies on the plight of Thai Town.

The Los Angeles City Council voted unanimously on October 27, 1999, to designate the area as "Thai Town," the first place in the United States with that name. The designation was proposed by Councilwoman Jackie Goldberg, who said the move would bring neighborhood pride, economic development and promotion of tourism to the area. It was significant to Goldberg that the staff of the Thai Community Development Center includes other Asians, Latinos and whites, all intent on improving the East Hollywood business community. in general. "They're already calling Thai Town the 77th province," said Thai Chamber of Commerce President Niphun Rojanasopondist, referring to the 76 provinces that make up Thailand.

The action followed a nine-year campaign by the Development Center. According to Ernest J. Vigoreaux, a half-Puerto Rican, half-Thai planner for the center, the idea was to bring tourism and business into a shabby section of town, helping not only Thais but everyone else there. The center won a $15,000 Department of Public Works matching grant to create a garden and to bring from Thailand four golden statues of kinnari (mythical creatures who are half angel, half bird) to mark Thai Town's borders.

On the first Sunday in April, Thai Town celebrates Songkran, the Thai New Year, by closing off Hollywood Boulevard within its boundaries, and setting up food stands and entertainment on the street along with a parade on the street from New Hampshire Avenue to Winona Boulevard.

All content from Kiddle encyclopedia articles (including the article images and facts) can be freely used under Attribution-ShareAlike license, unless stated otherwise. Cite this article:
Thai Town, Los Angeles Facts for Kids. Kiddle Encyclopedia.