The Devil's Point facts for kids

The Devil's Point (Scottish Gaelic: Bod an Deamhain) is a mountain in the Cairngorms of Scotland, lying to the west of the Lairig Ghru pass. The English name is a result of a visit to the area by Queen Victoria. 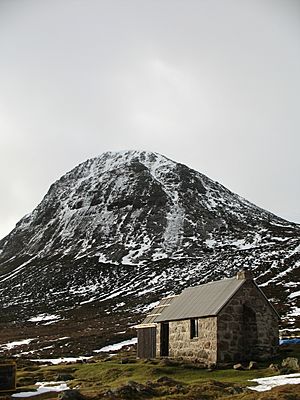 Although The Devil's Point is strikingly distinct when seen from the south, it is a subsidiary peak of Cairn Toul, the summit of which lies some 3 km (1.9 mi) to the north. The easiest route is to follow the path leading up the Coire Odhar from Corrour Bothy, on the eastern side of the mountain. To reach the bothy requires a long walk in; the most usual route is to follow the Lairig Ghru from Linn of Dee, a distance of some 12 km (7.5 mi).

All content from Kiddle encyclopedia articles (including the article images and facts) can be freely used under Attribution-ShareAlike license, unless stated otherwise. Cite this article:
The Devil's Point Facts for Kids. Kiddle Encyclopedia.