The Guide Dogs for the Blind Association facts for kids

The Guide Dogs for the Blind Association, known by the working name Guide Dogs, is a British charitable organisation founded in 1934.

Guide Dogs helps blind and partially sighted people across the UK through the provision of guide dogs, mobility and other rehabilitation services. They also campaign for the rights of those with visual impairments and invest in eye disease research.

The head office is near Reading in Berkshire. There are four Guide Dog Training Schools in the UK, located in Woodford Bridge, Leamington, and Atherton in England and Forfar in Scotland; a breeding centre near Leamington; 20 Mobility Teams and fundraising branches across the UK. The charity's filed accounts for the year ended December 2015 show income for the year of £103.7 million. In April 2017 the charity was among 11 charities fined by the Information Commissioner for breaching the Data Protection Act by misusing donors’ personal data. It was fined £15,000.

The guide dog service provides a blind or partially sighted person with a guide dog. These dogs are born in the home of a volunteer brood female dog holder and the dogs are moved to the home of a volunteer puppy walker when they are six weeks old. After 12 to 14 months the dogs will move to a specialist trainer, where they train for around 26 weeks to gain skills. This includes three to five weeks of intensive work with their new owner. Every person and dog is unique, so matching a guide dog to an owner is a complex process and trainers have to take into account all a person’s needs, including their walking speed, height, and lifestyle. Guide Dogs are committed to supporting the partnership and to the guide dog owner for as long as needed. A guide dog user could have up to eight dogs during their lifetime. After between six and seven years’ service, a guide dog is retired and re-homed.

Guide Dogs are a world leader in the breeding and training of guide dogs and is a co-founder of the International Guide Dog Federation.

There are currently 4,800 working guide dog partnerships in the UK and more than 1,300 puppies are born each year. Guide dog owners only have to pay a nominal 50p for their dog to ensure no-one is prevented from having one due to a lack of funds although the full ‘lifetime cost’ of a guide dog from birth to retirement is around £50,000. The charity is completely reliant on voluntary donations and legacy income.

Dogs are often not permitted in some places, such as restaurants or other places involved with food, but guide and other assistance dogs are legally allowed entry (under the Equality Act 2010 in the UK). However, there are regular reports of guide dog users being refused entry to shops, restaurants, taxis and other places. The Guide Dogs charity works with guide dog users and companies to both raise awareness of the law and support official complaints. 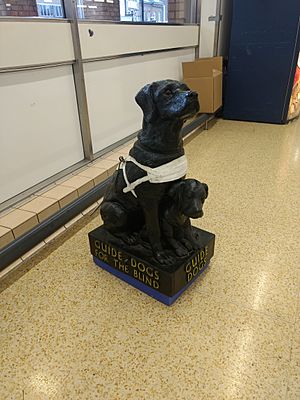 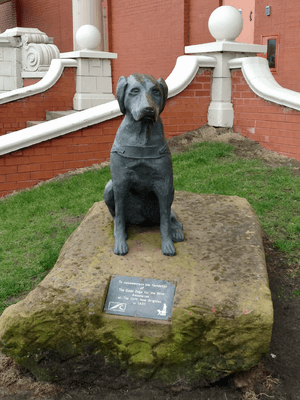 Statue to commemorate the foundation of the Guide Dogs for the Blind Association at The Cliff, New Brighton, in 1931

The first four British guide dogs - Judy, Flash, Folly and Meta - completed their training at Wallasey, Wirral in 1931, and three years after this The Guide Dogs for the Blind Association was formed. This would not have been possible without the work of Muriel Crooke and Rosamund Bond, German shepherd breeders who trained the first guide dogs. The first permanent trainer for Guide Dogs was Captain Nikolai Liakhoff, who came to England in 1933. In 1941, the organisation's premises at The Cliff in Wallasey was commandeered for war purposes and the Guide Dogs moved to new premises in the centre of England at Leamington Spa.

In 1964, the charity's work was introduced to a new generation when the children's television programme Blue Peter launched an appeal to collect silver foil and milk bottle tops. Blue Peter raised enough to fund two guide dog puppies, Cindy and Honey, and the programme followed their training. This feature has been repeated in the early 1980s, in 2006 with Andy Akinwolere and puppy Magic and in 2014 another puppy, Iggy.

In 2007 in conjunction with the BBC Breakfast programme, Guide Dogs' annual Guide Dog of the Year award recognised achievements of individual guide dogs.

Guide Dogs relies on many volunteers, key roles filled by volunteers include puppy walking (where puppy walkers take a pup into their home for 12 to 14 months and help familiarise it with everyday sights and sounds), boarding (those who look after trainee guide dogs in the evenings and at weekends), breeding stock holders (those who look after the brood bitches and stud dogs), drivers, branch roles (such as branch treasurer or branch supporter), and fundraising.

Since 1990 Guide Dogs has provided funding for ophthalmic research to investigate ways to preserve sight and to prevent any further loss and especially to identify more efficient diagnosis or treatment plans. As part of this programme, Guide Dogs have funded:

Guide Dogs also carries out canine research for the health, welfare, quality of life and performance of its dogs; psychosocial research such as into the well-being of people who are blind and partially sighted and policy research.

Guide Dog of the Year

'Guide Dog of the Year' is an annual awards event run by Guide Dogs. Its aim is to recognise the work of the 4,700 guide dogs currently working for their blind or partially sighted owners around the UK. In 2014 the Inspirational Guide Dog Owner of the year award was awarded to Verity Smith and her guide dog Uffa.

Guide Dogs campaigns against Pavement Parking along with at least 17 other charitable organisations. The campaign supported the Pavement Parking Bill which would have introduced a law prohibiting pavement parking across England and Wales, unless specifically permitted. Although introduced in the 2014–15 session of UK Parliament, it made no further progress.

All content from Kiddle encyclopedia articles (including the article images and facts) can be freely used under Attribution-ShareAlike license, unless stated otherwise. Cite this article:
The Guide Dogs for the Blind Association Facts for Kids. Kiddle Encyclopedia.