The Little Mermaid II: Pinball Frenzy is a 2000 pinball video game developed by Left Field Productions and published by Nintendo for the Game Boy Color. First released in North America on September 24, 2000, it was later made available in PAL regions on March 16, 2001.

Disney Interactive developed The Little Mermaid II: Pinball Frenzy alongside Left Field Productions as part of its focus on children's entertainment software. Although the game received positive reviews, critics were divided over the decision to develop a pinball game based on The Little Mermaid franchise. Reviewers negatively compared it to the 1999 game Pokémon Pinball. 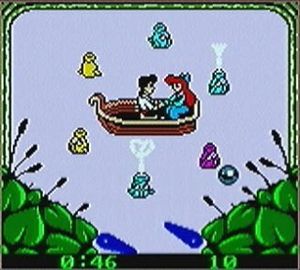 Minigames, including one based on the musical sequence for "Kiss the Girl", are a primary component of The Little Mermaid II: Pinball Frenzy.

The Little Mermaid II: Pinball Frenzy is a 2D pinball video game based on the 1989 film The Little Mermaid and its 2000 sequel The Little Mermaid II: Return to the Sea. It has two pinball tables, which each are connected to one of the film's protagonists: the mermaid Ariel and her daughter Melody respectively. The tables have references to the films, including images of Ariel's grotto and Ursula's cave and guest appearances from Flounder, Sebastian, and Dash among other characters. The menus, tables, and minigames feature unique background scores, which are reminiscent of those used in both films.

The Little Mermaid II: Pinball Frenzy does not have a prominent storyline, and instead focuses entirely on its gameplay mechanics. It is built on a different game engine from those used for the previous Nintendo pinball titles: Pokémon Pinball (1999) and Kirby's Pinball Land (1993). The tables include "flippers, multipliers, bonus targets, and multiballs", which IGN described as standard gameplay elements for pinball video games. Objectives include: performing timed skill shots, earning bonus points, and playing with three balls at once.

The player can unlock 16 minigames by earning points and completing activities. According to GameSpot, these games form the "underlying premise" of The Little Mermaid II: Pinball Frenzy. They are divided equally between the tables for Ariel and Melody. Each minigame is each based on scenes from the films. In one instance, the player hits frogs and fish from the "Kiss the Girl" sequence, and in another, they help Melody escape from a frozen block of ice in another. Two other minigames involve the player rescuing King Triton and other mermaids and helping people escape from a burning ship. A player is only given one life for each attempt to complete a minigame. If the player successfully finishes a minigame, it becomes accessible for replay through the main menu.

The player can adjust the game's difficulty by selecting three of five balls per game, and set the ball speed to either slow or fast: "Turtle" or "Rabbit". According to CNET, the game has a medium difficulty and a learning curve of roughly half an hour. It has a rumble feature, which vibrates the Game Boy Color when turned on with an extra battery. The game supports up to four players through alternating tables, and has cheat codes for infinite balls and a maximum score.

All content from Kiddle encyclopedia articles (including the article images and facts) can be freely used under Attribution-ShareAlike license, unless stated otherwise. Cite this article:
The Little Mermaid II: Pinball Frenzy Facts for Kids. Kiddle Encyclopedia.