The Royal Hamilton Light Infantry (Wentworth Regiment) (RHLI) is a Primary Reserve infantry regiment of the Canadian Army, based at John Weir Foote VC Armoury in Hamilton, Ontario. The RHLI is part of 31 Canadian Brigade Group, which is part of 4th Canadian Division.

"On an autumnal maple leaf proper a bugle Argent stringed Vert enclosing the letters RHLI Or and ensigned by the Royal Crown proper, the base of the leaf surmounted by two scrolls Azure edged and inscribed WENTWORTH REGIMENT and SEMPER PARATUS in letters Or."

The maple leaf represents service to Canada, and the Crown, service to the Sovereign. The regiment's light infantry heritage is symbolised by the bugle. Combined, "RHLI" and "WENTWORTH REGIMENT" are a form of the regimental title, and "SEMPER PARATUS" is the motto of the regiment. 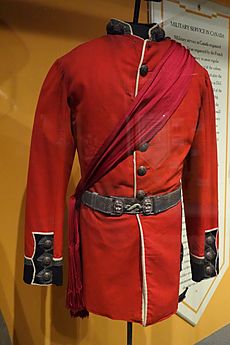 Details of the 77th Wentworth Regiment were called out on active service on 6 August 1914 for local protection duties.

The 4th Battalion (Central Ontario), CEF was authorised on 10 August 1914 and embarked for Britain on 3 October 1914. It disembarked in France on 12 February 1915, and fought as part of the 1st Infantry Brigade, 1st Canadian Division¸ in France and Flanders until the end of the war. The battalion was subsequently disbanded on 30 August 1920.

The 86th Battalion (Machine Gun), CEF was authorised on 22 December 1915 and embarked for Britain on 19 May 1916 where it provided reinforcements to the Canadian Corps in the field until 22 June 1916, when it was reorganised in Britain as the 'Canadian Machine Gun Depot, CEF'. The battalion was subsequently disbanded on 1 September 1917.

The 120th Battalion (City of Hamilton) CEF was authorised on 22 December 1915 and embarked for Britain on 14 August 1916 where it provided reinforcements to the Canadian Corps in the field until 20 January 1917, when its personnel were absorbed by the '2nd Reserve Battalion, CEF'. The battalion was subsequently disbanded on 17 July 1917.

The 129th Battalion (Wentworth), CEF was authorised on 22 December 1915 and embarked for Britain on 24 August 1916 where its personnel were absorbed by the 123rd Battalion, Royal Grenadiers, CEF and 124th Battalion (Governor General's Body Guard), CEF on 18 October 1916 to provide reinforcements to the Canadian Corps in the field. The battalion was subsequently disbanded on 21 May 1917.

The *205th Battalion (Hamilton), CEF) was authorised on 15 July 1916 and sent two reinforcing drafts overseas on 28 March and 29 April 1917. On 20 December 1916, it was reorganised in Canada as a draft-giving depot machine gun battalion, and on 31 October 1917, its personnel were absorbed by the 'Machine Gun Corps, CEF, Military District No. 2'. The battalion was subsequently disbanded on 12 July 1918.

The regiment mobilised the Royal Hamilton Light Infantry, CASF for active service on 1 September 1939. It was redesignated as the 1st Battalion, the Royal Hamilton Light Infantry, CASF on 7 November 1940. It embarked for Britain on 22 July 1940. The battalion took part in Operation Jubilee on 19 August 1942. (General Denis Whitaker, who fought as a captain with the RHLI at Dieppe, in a 1989 interview stated, “The defeat cleared out all the dead weight. It was the best thing that ever happed to the regiment.”)

The RHLI returned to France on 5 July 1944 as part of the 4th Infantry Brigade, 2nd Canadian Infantry Division, and continued to fight in North-West Europe until the end of the war. The overseas battalion was subsequently disbanded on 31 December 1945.

The regiment contributed an aggregate of more than 20% of its authorised strength to the various Task Forces which served in Afghanistan between 2002 and 2014.

The regiment has a long history which includes perpetuating the 2nd Regiment of York Militia from the War of 1812. Its formal lineage descends from the 13th Regiment, formed 11 December 1862, on a general order issued by the Governor General. It has earned thirty-nine battle honours in the two world wars. Most recently, members from the regiment have deployed to Afghanistan as part of the International Security Assistance Force (ISAF). They suffered their greatest single day of losses at Dieppe, France on 19 August 1942.

The anniversary of Dieppe is recognised each year by the regiment.

The RHLI's earliest direct ancestor is the 13th Battalion of Volunteer Militia established in 1862, which along with the 2nd Battalion the Queen's Own Rifles are modern Canada's oldest fighting regiments, having first seen combat in June 1866 at the Battle of Ridgeway against an invading Irish American Fenian insurgent army composed of better armed and more experienced recent civil war veterans. The regimental cap badge still bears the supposedly unlucky number from its oldest official antecedent. When the 13th Battalion first saw action at the Battle of Ridgeway it took heavy casualties and was forced to fall back along with the Queen's Own Rifles. The 13th Battalion commanding officer Lt. Colonel Alfred Booker who was in command of the brigade deployed in the battle was blamed for the disaster.

In 1870, another contingent from the battalion served in Manitoba during the Red River Rebellion. The regiment also traces ancestry to the 77th (Wentworth) Battalion of Volunteer Militia. Founded under that name in 1872, it was renamed the 77th Wentworth Regiment in 1900. 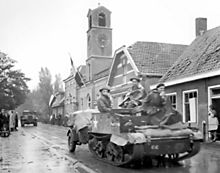 The Royal Hamilton Light Infantry Carrier move through the Dutch village of Krabbendijke on the Beveland Causeway, 27 October 1944

On the outbreak of the Second World War in September 1939, all the units of the Non-Permanent Active Militia of Canada were mobilised for overseas service. (This was not done in 1899 or 1914 because the original terms of sovereignty under the British North America Act-amended by the Statute of Westminster in 1931-did not include authority to deploy troops outside Canadian territory.) The Rileys were mobilised with the Canadian Active Service Force on 1 September 1939, reinforced from the 2nd Battalion at the regiment's home station, which began recruiting for home defence in early 1940. In November 1940, the active service battalion was redesignated the 1st Battalion, RHLI.

The 1st Battalion was assigned to the 4th Infantry Brigade in the 2nd Canadian Infantry Division. The battalion saw combat for the first time at Dieppe on August 19, 1942. Of the 582 soldiers who landed that morning, only 102 (18 percent) were not among the casualties: 197 killed, 174 captured and 194 wounded (including 85 also captured). The Dieppe survivors suffered great physical trauma and psychological distress as a result of the battle and the loss of so many of their friends and comrades in a battle that lasted only about eight hours.

The most highly decorated member of the battalion was the chaplain, Honorary Captain the Reverend John Foote, who remained at Dieppe with his wounded and captured comrades rather than accept evacuation to Britain. Padre Foote was nominated for the Victoria Cross while still a prisoner of war; the award was made after VE Day.

The 2nd Canadian Division came under command of the newly formed II Canadian Corps in Britain, and after almost two years of training after Dieppe, returning to France after D-Day, to fight through the Battle of Normandy from early July on. During Operation Spring, the Rileys earned the distinction of being the only assault unit to hold their objective (the village of Verrières). During the winter of 1944-45, the Rileys fought through the Battle of the Scheldt and the Rhineland, and on V-E Day was deep into Germany.

In the post-war period, the regular battalion was demobilized and the reserve battalion consequently lost its number. It looked like the RHLI would revert to the genteel neglect of the interwar period, until the Cold War interrupted. Some Rileys served in the United Nations Special Force in the Korean War and in 1955 the regiment was represented in the 27th Brigade that served on NATO duty in West Germany.

At home, its armoury was renamed in honour of Padre Foote, VC. In 1978, Prince Philip, Duke of Edinburgh, was appointed colonel-in-chief of the regiment, an appointment he held until his death in 2021. The RHLI, formerly part of the Hamilton Militia District, became part of Land Force Central Area's 31 Canadian Brigade Group in the 1990s.

The town of Dieppe, France, set aside a small park at the western end of the esplanade in which it erected a memorial of its own. Standing in the centre of the Square du Canada (Canada Square), the Dieppe-Canada Monument is a testimony to the association between Canadians and Normans which has existed since Samuel de Champlain sailed to found New France. The names of people and events which have linked Canada and Normandy over the centuries are recorded on the monument. Mounted on the wall behind it is a plaque that commemorates the Raid on Dieppe:

On 19 August 1942 on the beaches of Dieppe our Canadian cousins marked with their blood the road to our final liberation foretelling thus their victorious return on 1 September 1944. (translation from the French)

Members of the regiment have augmented Regular Force contingents on many operations including serving in the Balkans with United Nation forces (UNPROFOR) in the early 1990s and NATO from 1995-present. Over the past decades members have also served in; Cyprus, the Golan Heights, Bosnia, Sierra Leone, Congo, Haiti, Sudan, Dubai, Afghanistan, Kuwait, Iraq, Ukraine and Latvia. They were also on alert for the feared millennial or Y2K crisis which failed to materialise.

The City of Hamilton dedicated Dieppe Memorial Park in the Hamilton Beach neighbourhood on 19 August 2003, the 61st anniversary of the Dieppe Raid. Among the 250 invited guests and 1,000 onlookers were the Lieutenant-Governor of Ontario and 18 of the 24 Riley Dieppe veterans known to survive.

In 2017 the RHLI received the StAR (Strengthening the Army Reserve) Mission Task of Influence Activities (IA). This is a mixture of Psychological Operations (PSYOPS) and Civil-Military Cooperation (CIMIC).

Current parade strength is approximately 200-250 all ranks, making the RHLI one of the largest reserve regiments in the CAF. The RHLI currently consists of; one rifle company, "B" Company (Hamilton), an IA Company, "D" Company (Burlington) and an administration company, "A" Company, also at battalion headquarters in Hamilton. Battalion structures are maintained throughout the militia to allow for expansion in time of war.

Officers and Soldiers from the RHLI deployed to Afghanistan as part of the Canadian Forces contribution to the International Security Assistance Force (ISAF). This is the first time since the Second World War serving members from the regiment have taken part in combat operations. Most notably this included Operation Medusa in 2006. Members from the RHLI in Afghanistan served with Infantry Platoons, CIMIC & PSY OPS teams, Provincial Reconstruction Team (PRT), Force Protection Units, Helicopter Door Gunner Sections, and Canadian Special Operations Forces. 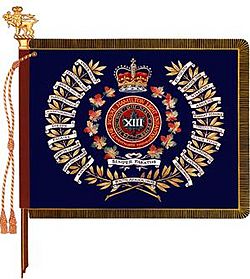 Battle honours in small capitals are for large operations and campaigns and those in lowercase are for more specific battles. Bold type indicates honours authorized to be emblazoned on the regimental colour.

The RHLI has two affiliated Royal Canadian Army Cadets corps. One corps in Hamilton (62 Canadian Cadet Corps) and one corps in Burlington (2379 Canadian Cadet Corps). Both corps have an outstanding training program as well as having had several cadets attend the Royal Military College of Canada or Civilian University - Regular Officers Training Program and join the Canadian Armed Forces. 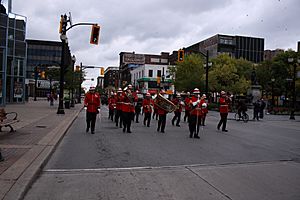 The RHLI Band marching from their barracks to the regimental church service.

The museum perpetuates the history of the regiment as well as preserves and displays relevant memorabilia. The museum is affiliated with: CMA, CHIN, OMMC and Virtual Museum of Canada.

All content from Kiddle encyclopedia articles (including the article images and facts) can be freely used under Attribution-ShareAlike license, unless stated otherwise. Cite this article:
The Royal Hamilton Light Infantry (Wentworth Regiment) Facts for Kids. Kiddle Encyclopedia.