The Vyne facts for kids 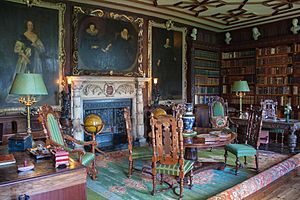 Interior view of the library 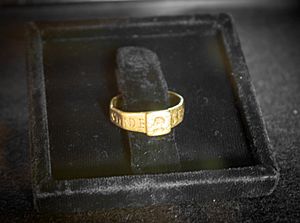 The Vyne is a 16th-century estate and country house outside Sherborne St John near Basingstoke in Hampshire, England. It is a Grade I listed building.

The Vyne was built for Lord Sandys, Henry VIII's Lord Chamberlain. The house retains its Tudor chapel, with stained glass. The classical portico on the north front, the first of its kind in England, was added in 1654 by Inigo Jones's pupil John Webb for the lawyer and politician Chaloner Chute. In the mid-eighteenth century The Vyne belonged to Horace Walpole's close friend John Chaloner Chute, who designed the Palladian staircase, whose magnificent apparent scale belies its actual small size.

In 1827, The Vyne was inherited by William Lyde Wiggett Chute from the reverend Thomas Vere Chute. Chute lived there from the death of Elizabeth Chute, widow of William Chute, in 1842 until his death in 1879 during which time he greatly improved the estate, particularly the access routes which were known for their poor quality. Horace Walpole had described them in the eighteenth century as so bad that the house "must be approached upon stilts". His improvements were recorded in articles that he wrote for the journal of the Royal Agricultural Society of England.

The Vyne was bequeathed by its final Chute owner, Charles Chute, to the National Trust in 1956.

The Vyne's roof underwent a two-year-long, £5.4 million restoration project before the house was fully reopened in October 2018.

In 2018, conservationists undertook the six-month restoration and cataloguing of the 2,500 books in the library at The Vyne, and have uncovered a number of centuries-old doodles in the margins of the collection's books.

Inspiration for Lord of the Rings

The Vyne holds an inscribed Roman ring as well as a lead tablet that speaks of a curse on the one who stole it. J. R. R. Tolkien was asked to comment on it as an expert on Anglo-Saxon history, including its connection to a mine fabled to have been dug by dwarves, and a few days after began writing Lord of the Rings.

All content from Kiddle encyclopedia articles (including the article images and facts) can be freely used under Attribution-ShareAlike license, unless stated otherwise. Cite this article:
The Vyne Facts for Kids. Kiddle Encyclopedia.