Thomas Holley Chivers (October 18, 1809 – December 18, 1858) was an American doctor-turned-poet from the state of Georgia. He is best known for his friendship with Edgar Allan Poe and his controversial defense of the poet after his death.

Born into a wealthy Georgia family, Chivers became interested in poetry at a young age. After he and his first wife separated, he received a medical degree from Transylvania University but focused his energy on publishing rather than medicine. In addition to submitting poems to various magazines and journals, Chivers published several volumes of poetry, including The Lost Pleiad in 1845, as well as plays. Edgar Allan Poe showed an interest in him and encouraged his work. Chivers spent the last few years of his life defending the reputation of Poe, who had died in 1849, though he also thought Poe had been heavily influenced by his own poetry. Chivers died in Georgia in 1858.

As a literary theorist, Chivers believed in divine inspiration. He encouraged the development of a distinctive American style of literature and especially promoted young writers. His poems were known for religious overtones with an emphasis on death and reunions with lost loved ones in the afterlife. Though he built up a mild reputation in his day, he was soon forgotten after his death. 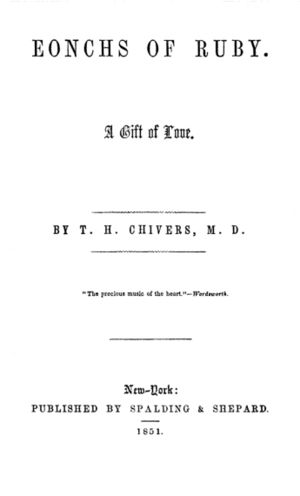 All content from Kiddle encyclopedia articles (including the article images and facts) can be freely used under Attribution-ShareAlike license, unless stated otherwise. Cite this article:
Thomas Holley Chivers Facts for Kids. Kiddle Encyclopedia.