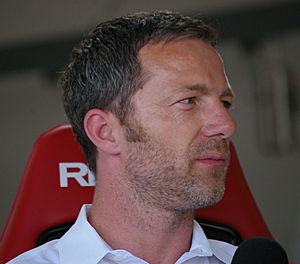 Thomas Linke (born 26 December 1969 in Sömmerda, then German Democratic Republic) is a former German football player for the German national team. He played as central defender for Schalke 04 and Bayern Muinich in the German Bundesliga and for Red Bull Salzburg in the Austrian Bundesliga.

He started with his local club BSG Robotron Sömmerda and went to FC Rot-Weiß Erfurt, where he played 84 games in the East German First Division. After the reunification of Germany he went to Schalke 04. In 1998 he came to Bayern Muinich. The time with this team was his most successful. With Bayern, Linke won five leagues, three German Cups and four league cups and the 2001Champions League and the Intercontinental Cup.

At the age of 35 he went to the newly formed FC Red Bull Salzburg in the Austrian Bundesliga. Soon he became team captain. In his second season with Salzburg he won the Austrian championship. 2007 he was told, that his contract would not be extended. His last year as player he spent with the second team of Bayern München. Then he became assistant to the director of football Heinz Hochhauser for Red BUll Salzburg. Later he became director of football with RB Leipzig. Soon he left for personal reasons.

Linke's international debut with the Germany national team took place in a 3–0 victory over South Africa, on 15 November 1997. He represented Germany at UEFA Euro 2000 and the 2002 FIFA World Cup. From 1997 till 2004 he played 43 international matches and scored one goal.

All content from Kiddle encyclopedia articles (including the article images and facts) can be freely used under Attribution-ShareAlike license, unless stated otherwise. Cite this article:
Thomas Linke Facts for Kids. Kiddle Encyclopedia.