Thornton, Idaho, originally called Texas Siding, is a townsite founded in 1917 and exists today as a township of Madison County, Idaho.

Thornton was named in honor of William Ezra Thornton, who had been prominent in the establishment of the townsite, and who also was for a time Thornton's Postmaster.

Thornton once thrived as "an enterprising center of commerce." Thornton is now primarily a rural community and is home to a potato warehouse and the original Thornton Merc convenience store.

Thornton's original store was "The Country Store" which was owned by William Ezra Thornton & ran by William & his wife, Wilhemina Hansas Lyman Thornton.

At one time, Thornton "boasted of two fine general mercantile stores". Thornton's store was owned in the early 1900s by George Marler. A competing store in Thornton was owned by C. L. Galbraith. In 1971 the Thornton Merc, which had replaced the two prior mercantile stores was operated by Mrs. Geraldine Evans. As of 2010 it is still in operation, and "Marler" can still be seen faintly painted on the north side. Descendants of the Marler family still own property in Thornton.

Thornton was once a place for recreation and amusement including a movie picture house operated by Mr. Fritz Hansen, a saloon, and a dance hall.

In the mid-forties the LDS Church purchased a grain elevator in Thornton from M.G. Koon and Sons. This elevator served to store welfare grain for church stakes until 1959, and can still be seen from U.S. Highway 20 for many miles north and south of Thornton.

When Thornton had a train depot, the Yellowstone Park Special passenger train would stop in Thornton on its way to Mack's Inn and Yellowstone Park. Visitors to Heise Hot Springs would arrive by railroad at Thornton and travel by horse-drawn vehicle to the nearby mineral springs.

Thornton once had a community church directed by Reverend Baird. He presided over the church until religious services were discontinued due to insufficient numbers of attendees. The LDS Church also for a time supported a primary and Sunday school service in Thornton for a few years. This was also discontinued as the population of Thornton diminished. The LDS Church continues to thrive in the nearby area, as expansion of Rexburg, Idaho has caused commuters including employees and students of Brigham Young University Idaho to seek available housing in Thornton and surrounding Archer and Lyman. 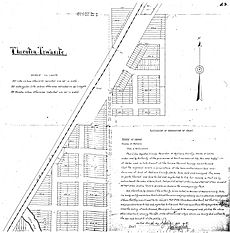 Thornton lies approximately seven miles south of Rexburg, Idaho and is bordered on the south by the Lorenzo Bridge, which crosses over the South Fork of the Snake River. Visible in the near west horizon are the Menan Buttes. Thornton lies on the Oregon Short Line Railroad and was built around what is now a remnant of U.S. Highway 191. This short segment of the original highway terminates within Thornton, at an old cement bridge. Since its original establishment, Thornton has been dissected by the construction of US Highway 20. The larger portion lies south of the highway. The northern portion has been nearly completely eliminated by the construction of the highway. The Archer-Lyman highway begins to the north and east of Thornton and meanders south and then and east towards Ririe, Idaho.

The old brick Thornton Hotel is no longer in operation and has been abandoned due to disrepair.

Within Thornton next to the remaining Thornton Merc is an old Trailer Park which has been converted into an RV Park and accommodates both campers and longer-term residents, many of whom are migrant workers who labor in the nearby potato warehouses. Another RV Park lies south across the old concrete bridge nearer to the Snake River South Fork. A bed and breakfast appears on the map here as the Sheffield House The Thornton Shell gas station and convenience store lies between Highway 20 and the railroad and used to be known as the Mini Mart. Behind the Shell station is the old grain elevator now adverstises the gas station. Also marooned between the two highways is and an older home which was once owned by the Keith Wilcox family in the mid 1900s, and has been stranded now due to the removal of a portion of South 3300 West. A nearby potato warehouse owned by Keith and his sons is no longer in operation, and is vacant except for individuals who have taken residency in the office space. Part of a community church still stands in Thornton, though it is no longer in use. There is a quiet RV park across from the potato warehouse called Thompson RV Park. It is a small 25 space park that prefers seniors, owned by Wayne & Linda Thompson. Mr. Thompson has lived in the house on this property all his life. It has full hook ups up to 50 amps and a laundry/shower/restroom building.

All content from Kiddle encyclopedia articles (including the article images and facts) can be freely used under Attribution-ShareAlike license, unless stated otherwise. Cite this article:
Thornton, Idaho Facts for Kids. Kiddle Encyclopedia.