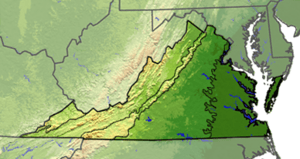 The Tidewater region is the easternmost (dark green) region.

The Tidewater region is a geographic area of southeast Virginia and northeastern North Carolina, part of the Atlantic coastal plain in the United States of America. Portions of Maryland facing the Chesapeake Bay are also given this designation. The area gains its name because of the effects of the changing tides on local rivers, sounds, and the ocean. The area is generally flat and low and composed of tidal marsh and large expanses of swamp. Much of the area is covered with poquoson and the higher areas are used for agricultural farmlands. Geographically, in North Carolina and Virginia the tidewater area is the land between the Suffolk Scarp and the Atlantic Ocean. The Hampton Roads area of Virginia is considered to be in the tidewater. Extreme Southern Maryland and parts of the lower Eastern Shore round out the northern fringe of the region on the Chesapeake Bay.

The term tidewater may be correctly applied to all portions of any area, including Virginia, where the water level is affected by the tides (more specifically, where the water level rises when the tide comes in). In the case of Virginia, the tidewater region includes the land east of the Fall Line, the natural border with the Piedmont Region. It includes Hampton Roads, the rest of the Virginia Peninsula, the Middle Peninsula, the Northern Neck, and the Eastern Shore.

Planters in the early American colonies extended their tobacco productions above the "fall line," where waterfalls or rapids mark the end of the Tidewater and the beginning of the foothill region known as the Piedmont.

All content from Kiddle encyclopedia articles (including the article images and facts) can be freely used under Attribution-ShareAlike license, unless stated otherwise. Cite this article:
Tidewater region Facts for Kids. Kiddle Encyclopedia.