Timothy Patrick Andrews (1794 – March 11, 1868) was an Irish-born, career U.S. Army officer. He served as Paymaster General of the Union Army during the American Civil War.

Timothy Patrick Andrews was born in Ireland, the son of George and Elizabeth Andrews. Along with his father, he immigrated to the United States in 1798. 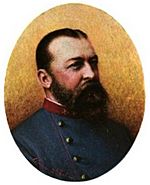 During the Mexican–American War, he was put in command of the Regiment of Voltigeurs and Foot Riflemen. His second in command, Lieutenant Colonel Joseph E. Johnston would go on to become one of the most senior general officers in the Confederate States Army during the American Civil War. He was distinguished for bravery at the Battle of Molino del Rey, and was brevetted brigadier general for conspicuous gallantry at the Battle of Chapultepec, where his regiment led the assault on Chapultepec Castle.

After the Mexican War Andrews returned to the pay department of the Army, gradually rising in rank. In late 1851 Andrews was promoted to Deputy Paymaster-General and in September 1862 became Paymaster-General of the United States Army.

Andrews died on March 11, 1868, at the age of 75 and was interred at Rock Creek Cemetery in Washington D.C.

All content from Kiddle encyclopedia articles (including the article images and facts) can be freely used under Attribution-ShareAlike license, unless stated otherwise. Cite this article:
Timothy Andrews (general) Facts for Kids. Kiddle Encyclopedia.