Timothy Foster (May 14, 1720 – April 3, 1785) and his family were the first colonial settlers of Winthrop, Maine. He was a captain in the Massachusetts militia during the American Revolutionary War. 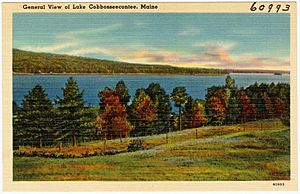 In 1764, Timothy Foster bought 200 acres of forest and meadow in Pondtown Plantation, now Winthrop, Maine. The land, purchased for £26 from a roving land speculator, was situated along the western shore of Cobbosseecontee Lake. The next year Foster moved from Attleborough to Pondtown with his wife Sibboleth Freeman and their 10 children, becoming the first pioneers to settle there. In 1766, Foster's land—designated as lot eight—was recorded in a colonial deed that required him to build a house, clear and till at least five acres, and live on the premises. In 1769, the Fosters built the first frame house in Pondtown. In 1771, Pondtown was incorporated as the town of Winthrop and Foster was elected to its first board of selectmen.

The town of Winthrop petitioned the Massachusetts General Court in January of 1773 with grievances against the Parliament of the United Kingdom. Two years later Timothy Foster was commissioned an ensign in the local militia. In July 1776, Foster was made a captain of the 7th Company in Colonel Joseph North's 2nd Lincoln County Regiment of the Massachusetts Militia and, in the same year, Foster's company was at Fort Ticonderoga in New York. From 1778 Foster was a captain in William Lithgow's detachment, which in 1779 defended Lincoln County from British attack after the defeat of American naval forces in the Penobscot Expedition at Penobscot Bay.

On April 1, 1785, Timothy Foster was struck by a tree limb which fractured his skull and rendered him unconscious. His son Stuart Foster and two neighbors walked to Falmouth, Maine, for a surgeon. The surgeon could not return with them, but he gave them a trephine—a saw to bore a hole in Foster's skull. The men did not return in time to save him and he died April 3, 1785.

A new home was built for the widow Foster by her sons, which still stands. Outside her home the Daughters of the American Revolution placed a memorial plaque on a stone that honors Timothy Foster as a patriot and the first settler of Winthrop.

All content from Kiddle encyclopedia articles (including the article images and facts) can be freely used under Attribution-ShareAlike license, unless stated otherwise. Cite this article:
Timothy Foster (settler) Facts for Kids. Kiddle Encyclopedia.