The Tongariro Power Scheme is a 360 MW hydroelectricity scheme in the central North Island of New Zealand. The scheme is currently operated by electricity generation company Genesis Energy.

The scheme takes water from tributaries of the Rangitikei, Whangaehu, Whanganui, and Tongariro rivers, which drain a 2,600-square-kilometre (1,000 sq mi) area covering Ruapehu, Ngauruhoe, Tongariro and the western Kaimanawa Ranges. The water is then sent through a large canal and tunnel system to generate electricity at three hydro power stations, located at Rangipo (120 MW), Tokaanu (240 MW) and Mangaio (2MW). The water is then drained into Lake Taupo where it is stored for further use in the succession of Waikato River power stations.

The Eastern Diversion starts at the Waiharakeke Stream, a tributary to the Whangaehu River, where the diversion starts. Water from here and 22 other intakes, including from the Waihianoa and Makahikatoa Streams, passes into the 8.4-kilometre (5.2 mi) long underground Wahianoa Aqueduct. The aqueduct heads eastward, passing under the actual Whangaehu River, but not taking any water from it due to the fact it drains Mount Ruapehu's crater lake and is too acidic. At the end of the aqueduct, near the Desert Road (State Highway 1), water is then diverted through the 1.4-kilometre (0.87 mi) Mangaio Tunnel under the State Highway and either into Mangaio Power Station or a drop structure to enter Lake Moawhango via the Mangaio Stream.

The Rangipo Dam is built on the Tongariro River, with water coming from the eastern slopes of Ruapehu and the western slopes of the Kaimanawa Ranges joining the scheme at the dam. Water from the nearby Waihohonu Stream is also taken and diverted via the 960-metre (3,150 ft) Waihohonu Tunnel to Rangipo Dam.

The Western Diversion starts at the Whakapapa River, taking water from it into a 16.5-kilometre (10.3 mi) long tunnel to Lake Te Whaiau, picking water up from the Okupata, Taurewa, Tawhitikuri, and Mangatepopo streams along the way.

Lake Rotoaira stores water from both the Eastern and Western Diversions, and also stores water coming off Mount Pihanga and Mount Tihia. The lake also acts as the head pond to the Tokaanu Power Station.

Water is taken from the northern end of Lake Rotoaira into the 6.1-kilometre (3.8 mi) Tokaanu Tunnel, which takes the water down under State Highway 47 and through Mount Tihia to the Tokaanu Power Station. After passing through the station, the water is deposited into the 3.8-kilometre (2.4 mi) Tokaanu Tailrace Canal.

The canal passes under the unique Tokaanu Tailrace Bridge, a combined road bridge and aqueduct. State Highway 41 travels over the top of the bridge, with the Tokaanu Stream, an important trout spawning stream, running under the road surface. The canal then drains into Lake Taupo at Waihi Bay.

Rangipo Power Station is located on the Eastern Diversion of the scheme. The power station is built 63 metres (207 ft) underground to minimise visual impact, the second hydro station in New Zealand to do so (after Manapouri Power Station). The power station has two turbines, each generating 60 megawatts (80,000 hp), giving the station a total capacity of 120 megawatts (160,000 hp). The station was commissioned in 1983. 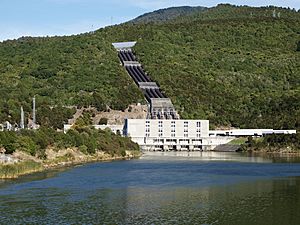 Tokaanu Power Station is located on the Rotoaira Diversion of the scheme. The power station has four turbines, each generating 60 megawatts (80,000 hp), giving the station a total capacity of 240 megawatts (320,000 hp). The station was commissioned in 1973. Tokaanu also houses the control room for the entire Tongariro Power Scheme.

All content from Kiddle encyclopedia articles (including the article images and facts) can be freely used under Attribution-ShareAlike license, unless stated otherwise. Cite this article:
Tongariro Power Scheme Facts for Kids. Kiddle Encyclopedia.