Kids Encyclopedia Facts
Not to be confused with North Ryde, New South Wales.

Top Ryde City (previously known as Top Ryde Shopping Centre) is a large indoor/outdoor shopping centre owned by The Blackstone Group. It is located in the suburb of Ryde in Northern Sydney. 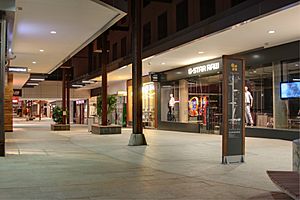 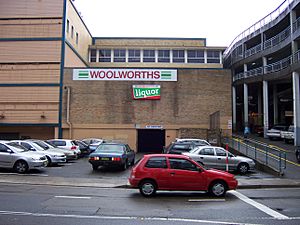 The original Top Ryde Shopping Centre opened, on the current site, 14 November 1957. It followed Brisbane's Chermside Drive-In Shopping Centre (now Westfield Chermside) as the second open-air mall-type complex in Australia. The original structure was anchored by Sydney-based A.J. Benjamin, a supermarket, a chain variety store and 45 other shops grouped around a pedestrian mall, with 400 parking spaces. Top Ryde was established with the motto “come as you are...shop in comfort” offering a new experience for the shopper who until this time would have needed to travel to Sydney or Parramatta to gain access to a major department store and such a wide range of variety shopping.

In 1962, Top Ryde was sold to Lend Lease. A.J. Benjamin store closed and was taken over by Grace Bros in 1964. Woolworths opened in 1963 in addition to the expansion of the centre which also included a variety store, several speciality shops and another 200 car parking spaces. In the 1970s, a Ten Pin Bowling Alley opened.

The centre underwent refurbishment and redevelopment in 1986 and changed its name to Top Ryde Shopping Square. A new multi-storey carpark was constructed, along with new entrances, roofing of the mall area and a general upgrade. Venture then moved into the space vacated by Grace Brothers.

Venture closed in 1991 and the centre went a minor development with the opening of a Target store and the reorganisation of the shops into service areas such as banking to the south-west of the mall and the food hall on the lower concourse.

With the opening of Macquarie Centre in 1981 and the continual growth of centres such as Westfield Hornsby, Parramatta, Birkenhead Point and most recently Rhodes which has affected the retail trade of Top Ryde. Many stores closed during the decline including Target (closed 2006). Towards the end of the centre's life, it was almost a dead mall featuring Woolworths, Franklins, a bowling alley and around 90 stores which were predominantly banks and service stores. The centre was situated over 2 floors. The lower level had direct access to the bottom carpark level and featured Woolworths and a small food court. It was connected to the upper level via a travelator. The upper level contained Franklins and access to Blaxland Road and Devlin Street, as well as access to bus services. A smaller, third level which could be accessed via a staircase from the upper level and the rooftop carpark (originally the upper level of Grace Bros. and connected by elevators) featured the bowling alley.

In July 2007, the centre was demolished, and shortly thereafter, construction began on redeveloping the site. 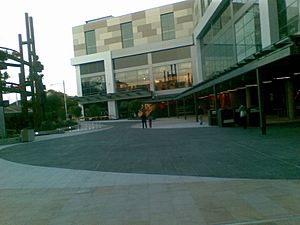 Stage 1 was opened on 5 November 2009, consisting of around 115 stores including Woolworths, Big W, Dan Murphys & JB Hi-Fi. This is on the Tucker Street side of the development. Other stages progressively opened throughout 2010, each stage next to the previous moving progressively towards Pope Street.

Stage 2 was completed and opened on 20 February 2010 and included the opening of Aldi, Rebel Sport and some speciality stores. Stage 3 consisting of the Myer department store and additional fashion outlets within the La Strada opened on 4 August 2010. Prime Minister Julia Gillard presided over the official opening on 20 August 2010. Event Cinemas, Strike Bowling, a childcare and a medical centre, Gymnasium, The new Ryde Library and The Ryde Planning and Business Centre all opened in February 2011.

The carparks accommodate 3000 cars and feature overhead red and green LED indicators to indicate the availability of parking spaces. Parking spaces for disabled and people with strollers are indicated by a blue LED.

The development of the project encountered a number of problems, including issues of worker safety in the surrounding roads and a near fatal workplace accident. In addition to this, the local Chamber of Commerce raised some concerns with the project managers about the movement of trucks near the site, although these seem to have been dealt with by the project managers with the termination of contracts with trucking companies.

On 5 May 2015, Myer has closed its Top Ryde store due to poor sales. Many customers were increasingly shopping at other Myer stores such as Parramatta, Chatswood, Macquarie Centre and Sydney. The redevelopment began in June 2015, Top Ryde City has lodged a Development Application with City of Ryde to replace the Myer store that occupies ground floor and level 1. As a result, Level 1 has been replaced with a Coles supermarket including a liquor store, three mini-majors, seven specialty retail stores and two kiosks. Ground floor has been replaced by a Kmart discount store, a mini-major, five speciality retail stores and two kiosks. Kmart has opened on June 16 2016 and Coles has opened on November 9, 2016. During redevelopment, many stores have closed or relocated including Freedom Furniture and Supa IGA which have both closed. Harris Scarfe will open their first full line Sydney store in May 2017 on the ground floor of the former Myer.

The development was awarded the NSW President's award in 2014 by the Urban Development Institute of Australia (UDIA).

Top Ryde has bus connections to the Sydney CBD, North Shore and Northern Suburbs, as well as local surrounding suburbs operated by Busways. Majority of its bus services are located in Devlin Road in front of the shopping centre's main entrance and Blaxland Road. There is no railway station at Ryde, the nearest stations are located at Meadowbank and West Ryde and a metro station at Macquarie Park.

All content from Kiddle encyclopedia articles (including the article images and facts) can be freely used under Attribution-ShareAlike license, unless stated otherwise. Cite this article:
Top Ryde City Facts for Kids. Kiddle Encyclopedia.