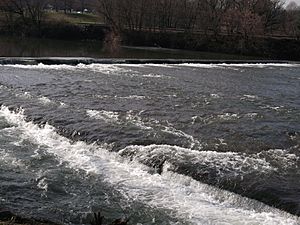 Upper Falls of Coal River, with Upper Falls Dam above and the historic lock in the foreground, viewed from Upper Falls Landing.

Tornado is a census-designated place (CDP) in Kanawha County, West Virginia, United States. Tornado is also known as Upper Falls, the U.S. Census Bureau's official name for the community. The United States Board on Geographic Names declared the community's official name to be Tornado in 2013 due to a request from the Kanawha County Commission, which determined that residents of the community supported the name Tornado over Upper Falls. It is also known as Andrews Heights, Big Bend and Upper Falls of Coal River.

The Coal River bisects the community and gives it its historical name from the cascading waters of its Upper Falls.

Tornado is in the Charleston, West Virginia metropolitan area.

There were 1,458 households out of which 33.6% had children under the age of 18 living with them, 59.3% were married couples living together, 9.6% had a female householder with no husband present, 4.6% had a male householder with no wife present, and 26.5% were non-families. 20.9% of all households were made up of individuals and 8.1% had someone living alone who was 65 years of age or older. The average household size was 2.54 and the average family size was 2.93.

There were 419 households out of which 37.2% had children under the age of 18 living with them, 68.7% were married couples living together, 8.6% had a female householder with no husband present, and 21.2% were non-families. 17.7% of all households were made up of individuals and 6.7% had someone living alone who was 65 years of age or older. The average household size was 2.65 and the average family size was 3.01.

The Upper Falls of Coal River was discovered in 1742 by John Peter Salling during an expedition along the Coal River. Salling and four companions each received a governor's commission from the state of Virginia to explore the territory east of the Mississippi River, in return for 10,000-acre land grants. It was this group that also discovered coal along the banks of the Coal River.

It was not until after the Revolutionary War that European settlers began moving into the area. Even then, the few who survived the attacks of the native peoples usually fled to safer destinations. But by around 1800, a gristmill was established by Joseph Thomas at the Upper Falls, which continued in operation until the 1930s.

Beginning about 1830, timber harvested from the region was floated on the Coal River to Saint Albans. At the same time, great quantities of marketable cannel coal were found on the upper Coal River. However, only at periods of high water could logs and shallow wooden boats loaded with coal be drifted over the Upper Falls and Lower Falls and on down the river.

A system of wooden-crib locks and dams designed to make Coal River navigable was constructed in the 1850s to transport cannel coal, bituminous coal, coal oil and timber to market. This began the era of two-way commercial steamboat traffic on the river. The Upper Falls was the site of Upper Falls Lock and Dam and Edward Kenna, who also developed a sawmill at the Upper Falls around 1850, was lockmaster; his son, John Edward Kenna, served as United States Senator from West Virginia. Damage caused by ongoing flooding and the outbreak of the Civil War suspended steam tug navigation of Coal River. Traffic resumed after the war, but ended permanently in 1881.

From 1858, at least ten failed attempts were made to build a rail line up the Coal River. Finally, under the direction of General Cornelius Clarkson Watts, a Confederate veteran, construction of the Coal River and Western Railway began in 1902 and was completed in 1904. The lasting economic boom brought by the railroad to the region saw the bustling Upper Falls Station offer daily service for both passengers and freight. Timber extraction ended in the 1920s, but the rail line through Upper Falls, now owned by CSX Transportation, still transports massive amounts of bituminous coal to global markets.

There was a rapid influx of people to the area during and soon after World War II and many came to live in Tornado. They found employment in the defense and chemical manufacturing industries in the Kanawha Valley and benefited from economic prosperity as a result. Today, Tornado is a residential suburb and recreation destination of the Charleston metropolitan area.

Andrews Heights is an area of Upper Falls named for landowner R. Carl Andrews, who served as mayor of Charleston from 1947 to 1950 and was a Democratic candidate for governor of West Virginia in 1940. Andrews Heights Elementary School was named for Mayor Andrews.

Big Bend is an area of Upper Falls that is named for the Big Bend of Coal River. The river's Big Bend circumscribes Big Bend Golf Course, which also takes its name.

The official name Tornado first appeared when a new post office opened in the community in 1881.

The primary means of transportation throughout the CDP today is by secondary highways.

The Coal River subdivision, a CSX Transportation main line, runs parallel to Coal River, dividing Tornado from north to south. Its primary use is to transport coal from the Southern West Virginia coalfields to global markets. There was once a railroad station in the community with the name Upper Falls Station.

Coal River is still designated by the federal government as a navigable waterway, though the 19th century system of locks and dams that made commercial transportation possible no longer exists.

Churches of the following denominations serve the spiritual needs of Tornado residents.

All content from Kiddle encyclopedia articles (including the article images and facts) can be freely used under Attribution-ShareAlike license, unless stated otherwise. Cite this article:
Tornado, West Virginia Facts for Kids. Kiddle Encyclopedia.