In organic chemistry, torquoselectivity describes electrocyclic reactions that produce one isomer more than the other. An official definition is "the preference for inward or outward rotation of substituents in conrotatory or disrotatory electrocyclic reactions." In other words, a chemical reaction is torquoselective if the groups of atoms that hang from a ring of atoms are more likely to have rotated in a particular direction during the reaction (instead of being equally likely to rotate in both possible directions.) Torquoselectivity is different from the normal diastereoselectivity of pericyclic reactions. Instead it is more selectivity beyond the Woodward–Hoffmann rules. The name comes from the idea that the substituents in an electrocyclization appear to rotate during the reaction. The reaction produces a single product because only one direction of rotation was allowed (that is, the direction of rotation on the substituents was favored). The concept was originally developed by Kendall N. Houk.

When a chemical reaction closes a ring, its torquoselectivity is the same as enantioselectivity. A single enantiomer of a cyclization product is formed from the selective ring closure of the starting material. In a typical electrocyclic ring closing, selection for either conrotatory or disrotatory reactions modes still produces two enantiomers. Torquoselectivity is a discrimination between these possible enantiomers that requires asymmetric induction.

Conrotatory and disrotatory modes of rotation each showing two possible directions of rotation that result in pairs of enantiomers for a generic hexatriene system. Note: in the case shown, there is no reason for the reaction to be torquoselective and both products would be expected for any particular set of conditions.

Torquoselectivity also happens in selective electrocyclic reactions that break open rings. The different directions of rotation produce distinct structural isomers. In these cases, steric strain is often the driving force for the selectivity. Studies have shown that the selectivity can also be changed by the presence of electron donating and electron withdrawing groups. 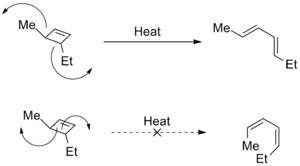 All content from Kiddle encyclopedia articles (including the article images and facts) can be freely used under Attribution-ShareAlike license, unless stated otherwise. Cite this article:
Torquoselectivity Facts for Kids. Kiddle Encyclopedia.