The "Town Musicians of Bremen" (German: Die Bremer Stadtmusikanten) is a popular German fairy tale collected by the Brothers Grimm and published in Grimms' Fairy Tales in 1819 (KHM 27).

It tells the story of four aging domestic animals, who after a lifetime of hard work are neglected and mistreated by their former masters. Eventually, they decide to run away and become town musicians in the city of Bremen. Contrary to the story's title the characters never arrive in Bremen, as they succeed in tricking and scaring off a band of robbers, capturing their spoils, and moving into their house. The Town Musicians of Bremen is a story of Aarne–Thompson Type 130 ("Outcast animals find a new home").

The Brothers Grimm first published this tale in the second edition of Kinder- und Hausmärchen in 1819, based on the account of the German storyteller Dorothea Viehmann (1755–1815).

In the story, a donkey, a hound, a cat, and a rooster, all past their prime years in life and usefulness on their respective farms, were soon to be discarded or mistreated by their masters. One by one, they leave their homes and set out together. They decide to go to Bremen, known for its freedom, to live without owners and become musicians there ("Something better than death we can find anywhere").

On the way to Bremen, they see a lighted cottage; they look inside and see four robbers enjoying their ill-gotten gains. Standing on each other's backs, they decide to scare the robbers away by making a din; the men run for their lives, not knowing what the strange sound is. The animals take possession of the house, eat a good meal, and settle in for the evening.

Later that night, the robbers return and send one of their members in to investigate. He sees the Cat's eyes shining in the darkness and the robber thinks he is seeing the coals of the fire. He reaches over to light his candle. Things happen in quick succession; the Cat scratches his face with her claws, the Hound bites him on the leg, the Donkey kicks him with his hooves, and the Rooster crows and chases him out the door, screaming. He tells his companions that he was beset by a horrible witch who had scratched him with her long fingernails (the Cat), a man who has a knife (the Hound), a black monster who had hit him with a club (the Donkey), and worst of all, the judge who had screamed from the rooftop (the Rooster). The robbers abandon the cottage to the strange creatures who have taken it, where the animals live happily for the rest of their days.

In the original version of this story, which dates from the twelfth century, the robbers are a bear, a lion, and a wolf, all animals featured in heraldic devices. When the donkey and his friends arrive in Bremen, the townsfolk applaud them for having rid the district of the terrible beasts. An alternate version involves the animals' master(s) being deprived of his livelihood (because the thieves stole his money and/or destroyed his farm or mill) and having to send his animals away, unable to take care of them any further. After the animals dispatch the thieves, they take the ill-gotten gains back to their master so he can rebuild. Other versions involve at least one wild, non-livestock animal, such as a lizard, helping the domestic animals out in dispatching the thieves.

The story is similar to other AT-130 tales like the German/Swiss "The Robber and the Farm Animals", the Norwegian "The Sheep and the Pig Who Set Up House", the Finnish "The Animals and the Devil", the Flemish "The Choristers of St. Gudule", the Scottish "The Story of the White Pet", the English "The Bull, the Tup, the Cock, and the Steg", the Irish "Jack and His Comrades", the Spanish "Benibaire", the American "How Jack Went to Seek His Fortune" and "The Dog, the Cat, the Ass, and the Cock", and the South African "The World's Reward".

Joseph Jacobs also cites this as a parallel version of the Irish "Jack and His Comrades", and the English "How Jack went to seek his fortune". The tale also appears in American folktale collections.

The tale has been retold through animated pictures, motion pictures (often musicals), theatre plays and operas. 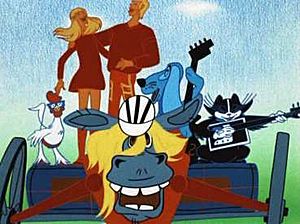 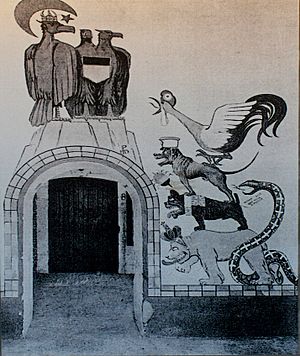 Statue of the Town Musicians of Bremen, Fujikawaguchiko, Japan.

All content from Kiddle encyclopedia articles (including the article images and facts) can be freely used under Attribution-ShareAlike license, unless stated otherwise. Cite this article:
Town Musicians of Bremen Facts for Kids. Kiddle Encyclopedia.