This article is about Transport in Townsville, Queensland.

The Bruce Highway (A1) bypasses the city and runs through the western suburbs, and the Flinders Highway (A6), the main highway to western localities such as Mount Isa and the Northern Territory, meets the Bruce Highway just south of Townsville. The Bruce Highway links Townsville to all of the State's major cities along the eastern seaboard, including Cairns, Proserpine, Mackay, Rockhampton, Bundaberg and Brisbane, the state capital.

In addition to the city's highways and motorway, it is serviced by a system of state and local gov routes, mainly suburban and arterial roads which span to all parts of the metropolitan area.

Townsville's public transport system consists of bus services operated by Sunbus. Sunbus provides regular services to and from many parts of the city, and also operates several express routes. For example, routes 1, 1A, 1B, 1C and 1X link the CBD to the Townsville Hospital via Stockland and to the suburb of Kelso. A public transport route is also available from the CBD to Bushland Beach, a route run by Townsville's Hermit Park Bus Service, also Townsville's biggest Charter Bus Service.

In addition to the bus system, Taxis operate 24 hours a day and service all parts of the metropolitan area.

Townsville has a significant port at the mouth of Ross Creek.The Port of Townsville mainly handles cargoes of cement and nickel ore, for processing at the Yabulu Nickel Refinery, 30 kilometres (19 mi) north of the port. The port also serves as an export point for sugar and for products from north Queensland's mines. The port has three sugar storage sheds, with the newest being the largest under-cover storage area in Australia. 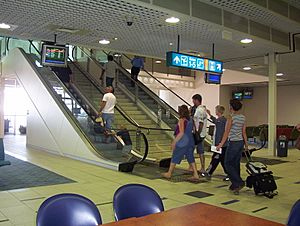 Inside the Departure Lounge of Townsville Airport

All content from Kiddle encyclopedia articles (including the article images and facts) can be freely used under Attribution-ShareAlike license, unless stated otherwise. Cite this article:
Transport in Townsville, Queensland Facts for Kids. Kiddle Encyclopedia.