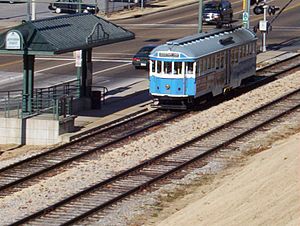 Memphis trolley on the Riverfront loop (2006)

Travel and shipment of freight are facilitated by two major Interstate highways, I-40 and I-55, that intersect at Memphis. I-240 is a highway spur that carries traffic around the city. A large volume of railroad freight traffic moves through Memphis, thanks to two Mississippi River railroad crossings and the convergence at Memphis of east-west with north-south rail routes. In addition, Memphis is the second busiest cargo port on the Mississippi River.

Local public transportation in the Memphis area is provided by the Memphis Area Transit Authority. 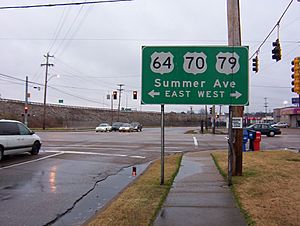 Interstate 40 (I-40), its spur highway Interstate 240 and Interstate 55 (I-55) are the main freeways in the Memphis area. I-40 and I-55 (along with rail lines) cross the Mississippi at Memphis from the state of Arkansas.

Memphis is served by seven primary U.S. Highways, more than any other city in the Southeastern United States.

U.S. Highway 51 enters Memphis from the south along with TN 3 as Elvis Presley Boulevard. The road changes names to Bellevue Boulevard before meeting Union Avenue. Highway 51 continues along Union Avenue to Danny Thomas Boulevard, which eventually changes into Thomas Street. The route then heads north towards Millington.

U.S. Highway 61 enters the city from the south along with TN 14 as Third Street. The highway runs to E.H. Crump Boulevard, turning west and eventually crossing the Memphis & Arkansas Bridge.

U.S. Highway 64 enters with Interstate 55 on the Memphis & Arkansas Bridge, running along various streets until eventually heading east from the city along Stage Road towards Somerville.

U.S. Highways 70 and 79 duplex in the entirety of the city, running from the Memphis & Arkansas Bridge along various streets until eventually meeting Summer Avenue. The two routes continue to the northeast, paralleling Interstate 40 towards Brownsville.

U.S. Highway 72 runs through Memphis along Poplar Avenue, one of the city's main roads. It leaves the city at the city limits of Germantown.

U.S. Highway 78 (US 78) leaves the city traveling to the southeast. The west end of U.S. Highway 78 begins in Memphis on Linden Avenue at the intersection of 2nd Street.

As it leaves Memphis, US 78 follows Lamar Avenue, historically known as Pigeon Roost Road for the nestings of passenger pigeons formerly in the vicinity. The east end of U.S. Highway 78 terminates in Charleston, South Carolina.

The Memphis Area Transit Authority (MATA) provides the area with scheduled city bus service and with paratransit service for persons with disabilities. Three express bus lines were added in 2008 to provide service into Downtown Memphis from outer suburbs.

MATA also operates a downtown trolley system with 24 stations along three lines. The trolley system is in the process of expanding into a regional system.

Memphis is served by Memphis International Airport, which handles more cargo than any other airport in the world as of 2007[update].

The airport is the international cargo hub for FedEx and became a passenger hub for Delta Air Lines after their merger with Northwest Airlines in 2008. Currently, only domestic flights are available for passengers. International flights are only available for cargo. Other passenger airlines providing service to the airport are Air Canada Jazz, AirTran Airways, American Airlines, Continental Airlines, SeaPort Airlines, United Airlines and US Airways.

The Tennessee Air National Guard operates the 164th Airlift Wing at the airport.

Memphis also has the 2nd biggest cargo port on the Mississippi River (the 4th biggest inland port in the United States): The International Port of Memphis. The International Port of Memphis covers the Tennessee and Arkansas sides of the Mississippi River from river mile 725 (km 1167) to mile 740 (km 1191). At 15 mi (24 km) long, it has 68 water fronted facilities, 37 of which are terminal facilities for moving products from shore to ship or vice versa. It is 400 mi (644 km) downriver from St. Louis, Missouri and 600 mi (966 km) upriver from New Orleans. 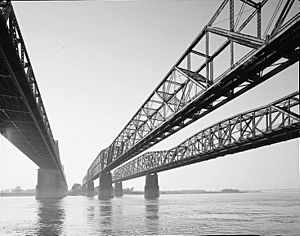 Four rail and highway bridges cross the Mississippi River at Memphis. They are, in order of their opening: the Frisco Bridge, the Harahan Bridge, the Memphis & Arkansas Bridge and the Hernando de Soto Bridge. The piers of the first three bridges had to be lined up for river navigation as they were built side-by-side at a narrow point in the river.

The Frisco Bridge (May 12, 1892) was the longest bridge in North America when it opened and was originally called the Great Bridge at Memphis. This cantilever truss steel railroad bridge was built between 1888–1892. It was designed by George S. Morison, who also designed the Taft Bridge in Washington, D.C..

The Harahan Bridge (July 14, 1916) is a trestle railroad bridge originally built with narrow, one-way wooden cantilevered roadways along the outsides so it could be used for cars. In 1928, sparks from a train ignited and set fire to one of the wooden plank roads. At present only trains use the Harahan Bridge, but a pedestrian walkway and bike path was scheduled to be completed in fall 2016. 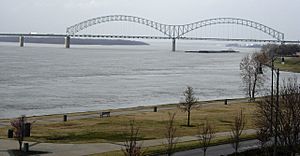 The Memphis & Arkansas Bridge (December 17, 1949), carries Interstate 55 and has a pedestrian walkway. The bridge was built between 1945–1949 and is the longest Warren truss- style bridge in the United States. It is listed on the National Historic Register.

The Hernando de Soto Bridge (August 2, 1973) with its steel arches carries Interstate 40. In 1986, "M" shaped lights became part of the bridge and a Memphis landmark.

The Guinness Book of World Records lists the de Soto bridge for its unique structural "letter" shape. In 2001 the mysterious disappearance and death of Harvard University biophysicist Don Wiley, whose abandoned car was found on the bridge, brought the Hernando de Soto Bridge national headlines.

All content from Kiddle encyclopedia articles (including the article images and facts) can be freely used under Attribution-ShareAlike license, unless stated otherwise. Cite this article:
Transportation in Memphis, Tennessee Facts for Kids. Kiddle Encyclopedia.