Trema tomentosa var. viridis is a forest plant. In Australia it occurs from Twofold Bay (37° S) in New South Wales to far northern Queensland, New Guinea and West Papua (Indonesia). It had been recorded near Mallacoota, but is now presumed extinct in the state of Victoria.

Common names include poison peach, native peach and peach-leaved poison bush. The poison peach is well regarded by rainforest regenerators for quick growth, shelter and shade and as a nursery species, and as a bird attracting plant. The habitat is rainforest regrowth, in disturbed open areas of rainforest, by forest roads and in open forest country. 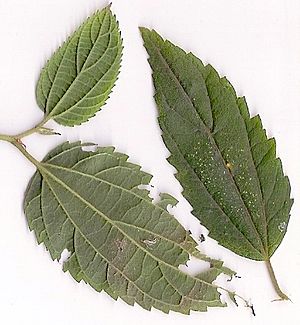 A shrub or small tree reaching a height of 8 metres and a stem diameter of 15 cm. The bark is smooth and grey, dotted with small lenticels, arranged in vertical and horizontal patterns. The grey or fawn coloured branchlets also feature lenticels.

Small greenish flowers in short cymes, appear year round, though most often between December and March. The fruit is a tiny black drupe, 2 to 6 mm in diameter, with a single black seed. The fruit matures between February and August and is eaten by a variety of birds; including brown cuckoo-dove, Australasian figbird, Lewin's honeyeater and olive-backed oriole. Germination is not difficult from fresh seed or cuttings.

All content from Kiddle encyclopedia articles (including the article images and facts) can be freely used under Attribution-ShareAlike license, unless stated otherwise. Cite this article:
Trema tomentosa var. viridis Facts for Kids. Kiddle Encyclopedia.