Trillium sessile, known as toadshade, sessile trillium, sessile-flowered wake-robin, and toad trillium, is a perennial spring wildflower native to the central part of the eastern United States and the Ozarks. Toadshade can be distinguished from other Trillium species by its single, foul smelling, stalkless, flower nestled in the middle of its three bracts. The bracts are sometimes, but not always mottled with shades of light and dark green. The specific epithet comes from the Latin word sessilis which means low sitting, referring to its stalkless flower.

Trillium sessile has three oval to nearly circular bracts, up to 10 cm (3.9 in) long and 8 cm (3.1 in) across. The bracts are green or sometimes bluish, typically with mottling which fades as the flower matures. Each flower has three sepals and three petals. The petals are typically maroon or brownish, sometimes green or yellowish green, up to 3.5 cm (1.4 in) long and 2 cm (0.79 in) broad. It flowers between May and June. This plant is clump forming from a thick rhizome. The above ground parts of the plant die back by mid-summer, but may persist longer in areas that do not completely dry out. 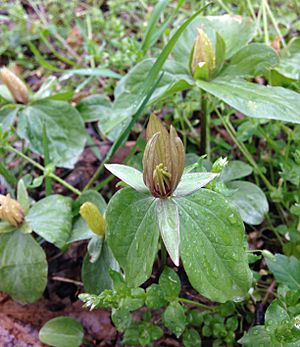 Uncommon, green flowered forms of this plant are sometimes classified as Trillium sessile f. viridiflorum Beyer. As of April 2020[update], Kew's Plants of the World Online accepts no infraspecific taxa for Trillium sessile.

The term Trillium sessile var. luteum used by some nurseries may cause confusion, since this is an older synonym for Trillium luteum, not of T. sessile.

Trillium sessile is most common in rich, moist woods but also can be found in limestone woods, flood plains, and along fence rows. It is persistent under light pasturing. The foul smelling flowers attract its primary pollinators, flies and beetles. The seeds have an elaiosome which attracts ants and wasps such as Vespula species. This fatty appendage increases the range of seed dispersal.

Toadshade is listed as state threatened in Michigan and state endangered in New York; both states are on the northern edge of its range. It is threatened by habitat fragmentation, deer browse, and invasive species such as Amur honeysuckle (Lonicera maackii) and wild boar (Sus scrofa).

Although some accounts indicate that the cooked greens of this plant may be edible as an emergency food, the entire plant, and especially the root, is known to induce vomiting. The fruit is considered a suspected poison.

Trillium sessile has been used medicinally to treat tumors. T. sessile is sometimes cited as having been used as a poultice for boils and as a panacea-like decoction, but this is doubtful as it is attributed to Native American tribes (the Yuki and Wailaki) of California, where this plant is not known to occur.

This plant is sometimes used in woodland wildflower gardens. Like many trilliums, T. sessile often does not transplant successfully from the wild.

All content from Kiddle encyclopedia articles (including the article images and facts) can be freely used under Attribution-ShareAlike license, unless stated otherwise. Cite this article:
Trillium sessile Facts for Kids. Kiddle Encyclopedia.