Government of the United Kingdom facts for kids

Her Majesty's Government (HMG; Welsh: Llywodraeth Ei Mawrhydi), commonly referred to as the UK government or British government, is the central government of the United Kingdom of Great Britain and Northern Ireland.

The government is led by the Prime Minister, who selects all the remaining ministers. The prime minister and the other most senior ministers belong to the supreme decision-making committee, known as the Cabinet. The government ministers all sit in Parliament, and are accountable to it. The government is dependent on Parliament to make primary legislation, and since the Fixed-terms Parliaments Act 2011, general elections are held every five years to elect a new House of Commons, unless there is a successful vote of no confidence in the government in the House of Commons, in which case an election may be held sooner. After an election, the monarch (currently Queen Elizabeth II) selects as prime minister the leader of the party most likely to command a majority of MPs in the House of Commons.

Under the uncodified British constitution, executive authority lies with the monarch, although this authority is exercised only by, or on the advice of, the prime minister and the cabinet. The Cabinet members advise the monarch as members of the Privy Council. They also exercise power directly as leaders of the Government Departments.

The current prime minister is Boris Johnson, who took office on 24 July 2019. She is the leader of the Conservative Party.

Her Majesty's Government and the Crown 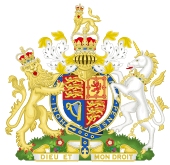 The British monarch, currently Queen Elizabeth II, is the head of state and the sovereign, but not the head of government.

The monarch takes little direct part in governing the country, and remains neutral in political affairs. However, the legal authority of the state that is vested in the sovereign and known as the Crown remains the source of the executive power exercised by the government.

In addition to explicit statutory authority, in many areas the Crown also possesses a body of powers known as the Royal Prerogative, which can be used for many purposes, from the issue or withdrawal of passports to declaration of war. By long-standing custom, most of these powers are delegated from the sovereign to various ministers or other officers of the Crown, who may use them without having to obtain the consent of Parliament.

The head of the government, the prime minister, also has weekly meetings with the monarch, when she "has a right and a duty to express her views on Government matters. ... These meetings, as with all communications between The Queen and her Government, remain strictly confidential. Having expressed her views, The Queen abides by the advice of her ministers.".

Royal Prerogative powers include, but are not limited to, the following:

Even though the United Kingdom has no single constitutional document, the government published the above list in October 2003 to increase transparency, as some of the powers exercised in the name of the monarch and which are part of the Royal Prerogative. However, the complete extent of the Royal Prerogative powers, many of them originating in ancient custom and the period of absolute monarchy, or modified by later constitutional practice, has never been fully set out.

Main entrance of 10 Downing Street, the residence and offices of the First Lord of HM Treasury

The prime minister is based at 10 Downing Street in Westminster, London. Cabinet meetings also take place here. Most government departments have their headquarters nearby in Whitehall.

Since 1999, certain areas of central government have been devolved to accountable governments in Scotland, Wales and Northern Ireland. These are not part of Her Majesty's Government, and are accountable to their own institutions, with their own authority under the Crown. By contrast, there is no devolved government in England.

The government's powers include general executive and statutory powers, delegated legislation, and numerous powers of appointment and patronage. However, some powerful officials and bodies, (e.g. HM judges, local authorities, and the Charity Commissions) are legally more or less independent of the government, and government powers are legally limited to those retained by the Crown under Common Law or granted and limited by Act of Parliament, and are subject to European Union law and the EU competencies that it defines. Both substantive and procedural limitations are enforceable in the Courts by judicial review.

Nevertheless, magistrates and mayors can still be arrested for and put on trial for corruption, and the government has powers to insert commissioners into a local authority to oversee its work, and to issue directives that must be obeyed by the local authority, if the local authority is not abiding by its statutory obligations.

By contrast, as in every other EU member state, EU officials cannot be prosecuted for any actions carried out in pursuit of their official duties, and foreign country diplomats (though not their employees) and foreign Members of the European Parliament are immune from prosecution in the UK for anything at all. As a consequence, neither EU bodies nor diplomats have to pay taxes, since it would not be possible to prosecute them for tax evasion. This caused a dispute in recent years when the US Ambassador to the UK claimed that London's congestion charge was a tax, and not a charge (despite the name), and therefore he did not have to pay it – a claim the Greater London Authority disputed.

Similarly, the monarch is totally immune from criminal prosecution and may only be sued with her permission (this is known as sovereign immunity). The monarch, by law, is not required to pay income tax, but Queen Elizabeth II has voluntarily paid it since 1993, and also pays local rates voluntarily. However, the monarchy also receives a substantial grant from the government, the Sovereign Support Grant, and Queen Elizabeth II's inheritance from the Queen Mother was exempt from inheritance tax.

In addition to legislative powers, HM Government has substantial influence over local authorities and other bodies set up by it, by financial powers and grants. Many functions carried out by local authorities, such as paying out housing benefit and council tax benefit, are funded or substantially part-funded by central government.

Neither the central government nor local authorities are permitted to sue anyone for defamation. Individual politicians are allowed to sue people for defamation in a personal capacity and without using government funds, but this is relatively rare (although George Galloway, who was a backbench MP for a quarter of a century, has sued or threatened to sue for defamation a number of times). However, it is a criminal offence to make a false statement about any election candidate during an election, with the purpose of reducing the number of votes they receive (as with libel, opinions do not count).

All content from Kiddle encyclopedia articles (including the article images and facts) can be freely used under Attribution-ShareAlike license, unless stated otherwise. Cite this article:
Government of the United Kingdom Facts for Kids. Kiddle Encyclopedia.