The United States Bullion Depository, often known as Fort Knox, is a fortified vault building located within the United States Army post of Fort Knox, Kentucky, used to store a large portion of United States official gold reserves and occasionally other precious items belonging or entrusted to the federal government. It is estimated to have roughly 2.3% of all the gold ever refined throughout human history. 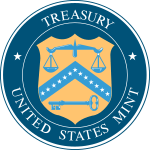 Seal of the U.S. Mint

In 1933, U.S. President Franklin D. Roosevelt issued Executive Order 6102, which outlawed the private ownership of gold coins, gold bullion, and gold certificates by American citizens, forcing them to sell these to the Federal Reserve. As a result, the value of the gold held by the Federal Reserve increased from $4 billion to $12 billion between 1933 and 1937. This left the federal government with a large gold reserve and no place to store it. In 1936, the U.S. Treasury Department began construction of the United States Bullion Depository at Fort Knox, Kentucky, on land transferred from the military. The Gold Vault was completed in December 1936 for US $560,000. The site is located on what is now Bullion Boulevard at the intersection of Gold Vault Road. The building was listed on the National Register of Historic Places in 1988, in recognition of its significance in the economic history of the United States and its status as a well-known landmark. It is constructed of granite mined at the North Carolina Granite Corporation Quarry Complex.

The first gold shipments were made from January to July 1937. The majority of the United States' gold reserves were gradually shipped to the site, including old bullion and newly made bars made from melted gold coins. Some intact coins were stored. The transfer used 500 rail cars and was sent by registered mail, protected by the U.S. Postal Inspection Service, and the U.S. Treasury Department agents. In 1974, a Washington attorney named Peter David Beter circulated a theory that the gold in the Depository had been secretly removed by elites, and that the vaults were empty. A group of reporters was allowed inside in order to refute the theory, which had gained traction thanks to coverage in tabloid newspapers and on the radio. Other than this 1974 event, no member of the public has been allowed inside.

During World War II, the depository held the original U.S. Declaration of Independence and U.S. Constitution. It held the reserves of European countries and key documents from Western history. For example, it held the Crown of St. Stephen, part of the Hungarian crown jewels, given to American soldiers to prevent them from falling into Soviet hands. The repository held one of four copies (exemplifications) of the Magna Carta, which had been sent for display at the 1939 New York World's Fair, and when war broke out, was kept in the US for the duration.

During World War II and into the Cold War, until the invention of different types of synthetic painkillers, a supply of processed morphine and opium was kept in the Depository as a hedge against the US being isolated from the sources of raw opium.

Below the fortress-like structure lies the gold vault lined with granite walls and protected by a blast-proof door weighing 20 tons. Members of the Depository staff must dial separate combinations known only to them. Beyond the main vault door, smaller compartments provide further protection. According to a Mosler Safe Company brochure:

The most famous, if not the largest, vault door order came from the Federal government in 1935 for the newly constructed gold depository at Fort Knox, Kentucky. Both the vault door and emergency door were 21-inches thick and made of the latest torch- and drill-resistant material. The main vault door weighed 20 tons and the vault casing was 25-inches thick.

The facility is ringed with fences and is guarded by the United States Mint Police. The Depository premises are within the site of Fort Knox, a US Army post, allowing the Army to provide additional protection. The Depository is protected by layers of physical security, alarms, video cameras, microphones, mine fields, barbed razor wire, electric fences, heavily armed guards, and the Army units based at Fort Knox, including unmarked Apache helicopter gunships of 8/229 Aviation based at Godman Army Airfield, the 19th Engineer Battalion, formerly training battalions of the United States Army Armor School, and the 3rd Brigade Combat Team of the 1st Infantry Division, totaling 30,000 soldiers, with associated tanks, armored personnel carriers, attack helicopters, and artillery.

There is an escape tunnel from the lower level of the vault to be used by someone who has been accidentally locked in.

For security reasons, no visitors are allowed inside the depository grounds. This policy has been enforced ever since the vault opened, and the only exception was an inspection by members of the United States Congress and the news media on September 23, 1974 led by then Director of the United States Mint, Mary Brooks.

Not all the gold bars held in the depository are of exactly the same composition. The mint gold bars are nearly pure gold. Bars made from melted gold coins, called "coin bars", are the same composition as the original coins, which is 90% gold. Unlike many .999 fine gold bullion coins minted in modern times for holding-purposes today, the coin alloy for pre-1933 US coins, which were intended for circulation, was a tougher and wear-resistant .900 fine alloy (balance copper) used for all US gold coins since 1837. (See crown gold for further gold coin alloy history.) 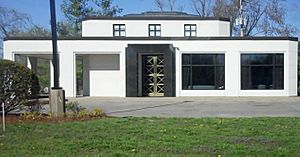 The bullion depository has become a symbol of an impregnable vault, leading to phrases such as "locked up tighter than Fort Knox" or "safer than Fort Knox". Many business names in the surrounding areas are references to the bullion depository. Also, the gold stored there has become a symbol of a vast amount, leading to the phrase "not for all the gold in Fort Knox" as a reference for not doing something under any circumstances.

All content from Kiddle encyclopedia articles (including the article images and facts) can be freely used under Attribution-ShareAlike license, unless stated otherwise. Cite this article:
United States Bullion Depository Facts for Kids. Kiddle Encyclopedia.