In 1895 during the sinking of a shaft for Catesby Tunnel a Roman cinerary urn was found about 575 yards (526 m) south of Upper Catesby.

In 1389 Upper Catesby was recorded as Overcatsby. It is a shrunken village. The modern hamlet has only a handful of 19th- and 20th-century houses, but is surrounded by numerous earthen features showing where cottages and the main village street had been. Most of the fields around the former village still have clear ridge and furrow marks from the ploughing of the medieval arable farming with an open field system divided into narrow strips.

Catesby House is a Jacobethan country house about 400 yards (370 m) west of Upper Catesby. It was built in 1863 and enlarged in 1894. It includes 16th-century linenfold panelling said to come from Catesby Priory, and 17th-century panelling, doorcases and a stair with barley-sugar balusters, all from the previous 17th-century Catesby House that was in Lower Catesby. 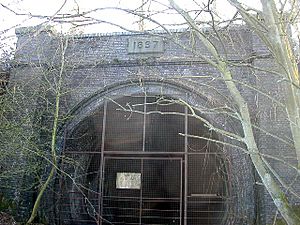 Catesby Tunnel is a disused railway tunnel on the route of the former Great Central Main Line. It passes about 250 yards (230 m) west of Upper Catesby and about 100 yards (91 m) east of Catesby House. The tunnel's north portal is about 400 yards (370 m) northwest of the hamlet, and its south portal is about 0.6 miles (1 km) north of Charwelton, just inside the southern boundary of Catesby parish.

All content from Kiddle encyclopedia articles (including the article images and facts) can be freely used under Attribution-ShareAlike license, unless stated otherwise. Cite this article:
Upper Catesby Facts for Kids. Kiddle Encyclopedia.